Mandalay Bay Heroes: They Gambled With Their Lives to Rescue Others in Las Vegas 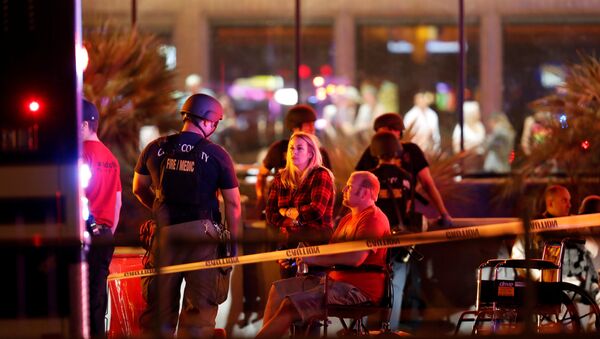 Latest reports say that at least 59 people have been killed and 527 injured in what has become the deadliest shooting in US history, after 64-year-old Stephen Paddock opened fire in a Las Vegas Casino on Sunday. The number of casualties could have been much higher if not for the self-sacrifice of brave individuals. Here are some of their stories.

The death toll from the deadly shooting at the Route 91 Harvest Festival in Las Vegas could possibly rise, Clark County Coroner John Fudenberg said in a press conference on Monday afternoon. Many remain in critical condition after local resident Stephen Paddock terrorized an outdoor concert crowd with what many described as "non-stop gunfire" from the 32nd floor of the Mandalay Bay hotel.

Meanwhile, an impressive number of stories emerged in the US media and social networks revealing the heroic and self-sacrificing behavior of people who happened to be on the site of the tragedy that Sunday evening.

Festival-goers protected their friends and loved ones while exposing themselves to gunfire. Others rushed to help complete strangers, trying to ease their sufferings.

​Veteran Marine Taylor Winston, 29, who served in Iraq, and his friend Jenn Lewis found an unattended truck near the venue with the keys still inside. Without any hesitation, they used it to transport victims to the nearby hospital, Winston later told The Daily Beast.

"Jenn and I luckily found a truck with keys in it and started transporting priority victims to the hospital and made a couple trips and tried to help out as best we could until more ambulances could arrive," the outlet quotes him as saying.

They transported about two dozen people in two trips to Desert Springs Hospital Medical Center, so that doctors could attend to them "before they bled out."

Jonathan Smith saved 30 people last night in Las Vegas before he was shot in the neck. True American hero! Show him some love and support!!#LasVegasShooting pic.twitter.com/UEQ4Z4fjsR

​A 30-year-old copy machine repairman, Jonathan Smith, who came to Las Vegas to celebrate the 43rd birthday of his brother, rushed to help some music lovers who were so frightened that they didn’t know what to do.

He later recalled to the Washington Post that he grabbed people and told them to follow him toward a handicapped parking area, away from Las Vegas Boulevard. He said he directed about 30 people away from the site. However, he was then shot in the neck when he stood up to urge a few young girls to get on the ground for better protection. 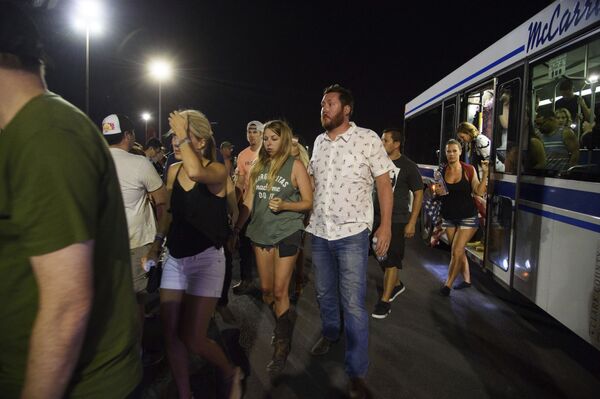 People arrive to Thomas & Mack Center via bus after hiding inside the Sands Corporation plane hangar after a mass shooting in which dozens were killed at the Route 91 Harvest country festival on early Monday, Oct. 2, 2017, in Las Vegas
© AP Photo / Al Powers/Invision

As a result, Smith has a fractured collarbone, a cracked rib and a bruised lung. He is likely to spend the rest of his life with a bullet lodged in the left side of his neck, as doctors decided to leave it, fearing that moving it might cause more damage.

Steve Keys, a firefighter from Glendale, California, was shot in the chest while performing CPR on a wounded female victim. His story was relayed to The Daily Beast by another festival attendee.

​29-year-old Lindsay Padgett and her fiancé Mike Jay used their truck to transport five wounded victims and those accompanying them to a hospital.

"We were just trying to get people to the hospital. We got halfway there, and as we were getting on the freeway, we saw an ambulance stopped, so we went over and they started taking the most critical people and putting them in the ambulance," Padgett told The ABC News.

The paramedics, unfortunately, could not save one of the men, who'd been shot in the back.

However, the most amazing common feature in all of these stories is that none of the people considered themselves heroes and humbly confessed that it was the least that they could have done.