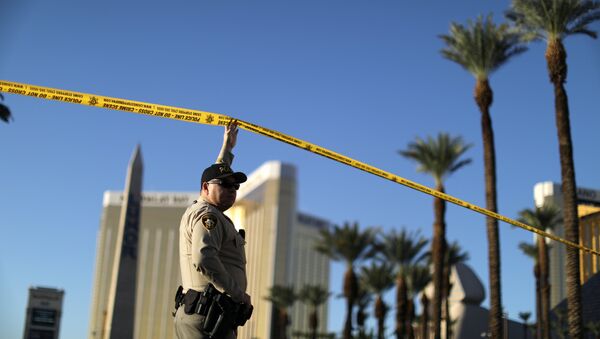 © REUTERS / Lucy Nicholson
Subscribe
International
India
Africa
At least 19 weapons, including 10 rifles and an assortment of handguns, have been discovered in the room of the sniper who massacred at least 58 people at a concert in the US city of Los Vegas, media reported on Monday.

WASHINGTON (Sputnik) — The news comes after Clark County Sheriff Joseph Lombardo told reporters earlier that at least 10 rifles were discovered in the room located in a plaza where a country music concert took place Sunday night.

"Two sources familiar with the investigation said that there was a combination of rifles and handguns at the scene, and one of those sources said there were 19 weapons in the room," ABC News reported.

The Bureau of Alcohol, Tobacco, Firearms and Explosives released a statement saying that it is conducting an "urgent trace" to determine the origin of the guns.

On Sunday, Stephen Paddock, 64, opened fire on a crowd of more than 22,000 concert-goers from his hotel room on the 32nd floor of the Mandalay Bay Hotel on Sunday evening. The man was found dead in his hotel room later. The shooting was the deadliest in modern US history, with at least 58 people killed and more than 500 injured, according to investigators.

Authorities have yet to identify a motive for the shooting but say they believe Paddock acted alone. However, Police Sheriff Joe Lombardo said at a press briefing that a woman linked to the attacker is still considered a person of interest in the investigation and will be contacted upon her return to the United States.