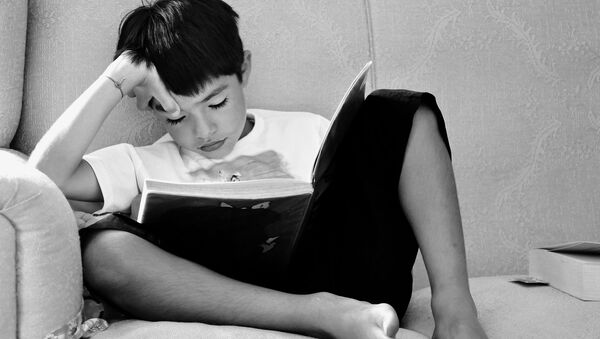 In a bid to embrace multiculturalism and promote inclusion, Sweden has launched children's books that educate pre-school kids on issues such as multiple wives and traditional Islamic clothing.

As Sweden is becoming increasingly multi-cultural, writers have taken steps to publish new literature explaining the newcomers' cultures to children. New books by Oscar Trimbel presented at the Gothenburg Book Fair challenge the established norms of Nordic society. According to the news portal Samhällsnytt, the books are being promoted by the society Somali Nordic Culture.

The 40-page book "Grandmother Is No Ghost" relates the story Omar, who gets to meet his grandmother who arrives from Somalia, yet apparently is no spook despite appearances and stereotypes.

"For Halloween, Omar dresses like a ghost, like many other children. He also wants Grandma to come along, because it's going to be extra spooky," the book's description on Scandinavia's largest web bookstore Adlibris says.

Embracing New Cultures: Sweden Condones Child Marriage for Immigrants
The second, 42-page book is "Grandfather Has Four Wives" and, as the name suggests, covers the issue of polygamy. The front cover features a bearded Muslim man with his four wives in the background.

The book relates the story of Asli, who has never been to Somalia, "but is finally going there with her Dad, to meet Grandfather and all her Grandmothers," Adlibris explains.

Oscar Trimbel worked in Somalia in the 1980s on behalf of the Swedish International Development Cooperation Agency (SIDA). Previously, he has promoted Somali folk songs and painted aquarelles inspired by his stay in the African country.

The two books were issued by the publishing house Författarnas Bokmaskin ("The Writers' Book Machine") in August. The appropriate reading age was reported as 3-6 years.

The new additions to the children's library sparked a controversy among Swedish web users.

"How the hell could there be a book on your premises called 'Grandfather Has Four Wives?' Why are you not embarrassed, this is bloody Sweden, not Somalia," a disturbed user wrote in reply to the Gothenburg Book Fair Twitter account.

"The book has already been ordered by libraries, and can therefore be presumed to have been fact-checked in accordance with the guidelines of the Association of Libraries. 'Grandfather Has Four Children' can also be ordered as a coloring book. In the future, taxpayers can therefore expect to contribute to books exploring more modern subjects than polygamy," Tino Sanandaji sarcastically wrote on his Facebook page.

He also proposed book titles such as "Big Sister Had a Boyfriend, Now He Is No More," "Little Sister Has Turned 9, Now She Is Getting Married" and "Mom Is Daddy's Cousin."

Reverse Integration? Swedes Urged to Learn Dari, Persian to Help Newcomers Adapt
Sanandaji's bitter irony might have been fueled by the fact that his own anti-immigration book "Mass Challenge" was rejected by Swedish libraries on the grounds that it allegedly hadn't been "fact-checked."

Unlike many other European nations, Sweden recognizes polygamous marriages performed abroad. All the wives are subsequently registered as spouses in the population register, yet only the first one is recognized officially in decisions made regarding residence permits and social security.