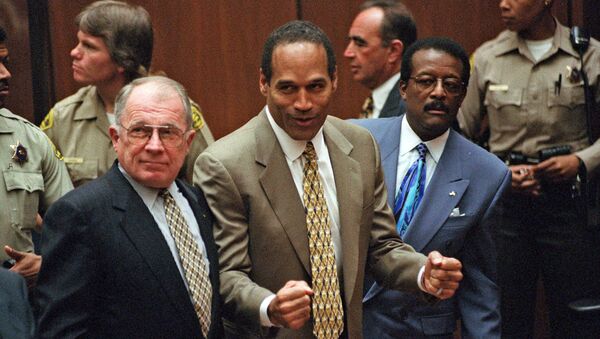 Simpson, 70, captivated America in the mid-1990s after being acquitted of the suspected murder of his ex-wife Nicole Brown Simpson and her friend Ron Goldman in 1994 (the majority of Americans still believe he is guilty). He was released Sunday after serving nine years for armed robbery. Simpson maintains his innocence regarding the murders, and insists the items he was attempting to steal in the armed robbery charges belonged to him in the first place.

As expected, O.J. "The Juice" Simpson's release caused quite a stir on Twitter. Sputnik has picked some of the funniest and most poignant.

For starters, users commented on the news that Simpson will be settling down in Las Vegas, some using appropriately 90s-era references to make their point.

O.J Simpson decides to live in Las Vegas which is a terrible idea for both O.J and Las Vegas. #OJSimpson pic.twitter.com/tdWUCVIhma

Others made jokes regarding the details of the prison release itself, using memes or clips from old comedies containing The Juice.

OJ Simpson has been released from prison according to the BBC. pic.twitter.com/XuwlalXdIR

OJ Simpson was released from prison and nothing has changed. He is still avoiding answering questions about his whereabouts #OJSimpson pic.twitter.com/N3AG7A99ic

Somebody found OJ Simpson after his release... Yall better leave this man alone before he has a flashback!!! 😐😐😐 pic.twitter.com/iKyGoBH4um

Some were wittier than others.

OJ Simpson on his way out of jail. pic.twitter.com/bA7rli39iB

Others still took a 'nostalgic' walk down memory lane, recalling the details of Simpson's dramatic attempt to escape police in his white Ford Bronco, the details of his trial, or his career before the murder trial.

Classic OJ Simpson footage from back in the day pic.twitter.com/rn4LyCH4Fc

#OJ is walking the streets & the @buffalobills are in first place...
Who didn't love the 90's...😂🏈#NFL #Bills #BillsMafia #OJSimpson pic.twitter.com/wUX08Qd6YJ

Other users brought up the racial divide which hung over America when Simpson was cleared of the murder charges in 1995, or the sarcasm with which many people have labeled his vows to find his ex-wife's 'real killers'.

Being excited OJ Simpson is out of jail.

Others simply asked where the time has gone, and what new technologies O.J. will have to get used to on the outside.

Y'all - OJ Simpson is 70!
I still think he's the middle aged man in the white bronco. pic.twitter.com/D05fPsYAcf

Others, of course, couldn't help but turn even this celebrity media event into a political circus.

Due to his criminal history and toxic narcissism, the Republicans will likely wait at least 6 months before running OJ Simpson for a Senate Seat.

Hillary Clinton IS like the OJ Simpson of politics

It's time for her to limp back to the woods and stop playing POTUS behind the scenes pic.twitter.com/ORBqsaewr1

The Juice Is Loose! My good friend O.J. Simpson is finally free. Im making him Secretary of Domestic Violence. Guy loves women as much as me pic.twitter.com/SGBYvsHnC7

Finally, a few users suggested that America has other more important problems to deal with, and should care less about this media event. Some even hoped that prison has reformed the man.

In the who cares category.....
O.J. Simpson freed from Nevada prison after 9 years https://t.co/El2hVRLQJr pic.twitter.com/DfuIcVStog

The court of public opinion has always labelled O.J. Simpson #guilty. Let’s hope he’s a #reformed #man & can turn his #brand around. 👍 #NFL