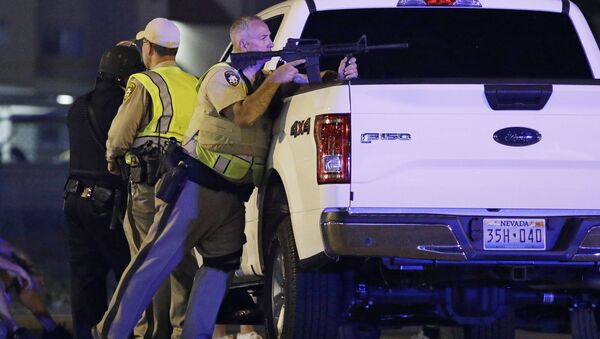 © AP Photo / John Locher
Subscribe
Las Vegas police said they believe that the suspect in the shooting spree that left more than 50 people dead and over 400 injured, committed suicide before police arrived at the scene.

Stephen Paddock, a 64-year-old suspect in the shooting at the Mandalay casino on Sunday, is believed to have shot himself prior to police's arrival at the scene. The man was found dead in a hotel room with some 10 firearms, Las Vegas Police Department Sheriff Joe Lombardo said.

"We believe that the individual killed himself prior to our entry," Lombardo told reporters.

WATCH First Horrifying VIDEO Of Shooting Erupting at Las Vegas Casino
Lombardo also said that the shooter was believed to have checked into the Mandalay Bay casino-hotel on September 28 and lived there up to Sunday, the day of the most deadly shooting incident in US history.

Paddock was said to have opened fire on a crowd of more than 22,000 concert-goers from his hotel room on the 32nd floor of the Mandalay Bay Hotel on Sunday evening.

Lombardo added that more than 50 people were killed, including a Las Vegas police officer, and more than 400 wounded.

"Currently the Clark County Fire Department is estimating the injuries to be well over 400, and the deaths associated with this event to be over 50," Lombardo stated.

The US Homeland Security Department said there was no "specific credible threat" to other public venues in the country following the incident. The New York Police Department (NYPD) said to Sputnik it was keeping a close eye on the developments in Las Vegas in the wake of the deadly mass shooting.