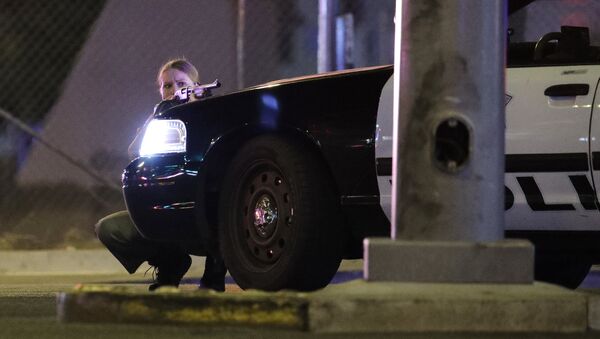 Las Vegas police have apprehended a man who opened fire at the Mandalay Bay Casino.

The Las Vegas police confirmed on Monday that a suspect in the shooting incident who'd been apprehended earlier was “down.”

Confirming that one suspect is down. This is an active investigation. Again, please do not head down to the Strip at this time.

The Las Vegas Metropolitan Police Department had responded to the shooting incident by launching a manhunt as scenes of the carnage were posted online.

Absolutely horrifying footage of an active shooter in Las Vegas.

The police, nevertheless, continued to urge people to avoid the area; part of the highway was closed off.

I15 freeway is closed to traffic at this time from Tropicana to Russell Rd. Again, please avoid the area.

The Hollywood Reporter cited officials who said that shots were heard at other locations, indicating that there may have been multiple gunmen.

​​Some flights bound for the Las Vegas airport were diverted in the early hours of Monday following incident, McCarran International Airport tweeted.

UPDATE: Flights in and out of @LASairport have been temporarily halted in response to reported shooting incident on Las Vegas Strip.