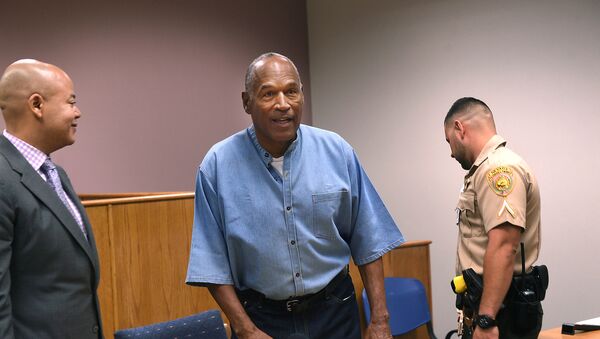 Nevada state prisons spokesperson Brooke Keast told The Associated Press that Simpson was freed early on Sunday, adding that she did not know who met him and where he headed to immediately after the release.

"I don't have any information on where he's going," Keast said.

Earlier, his lawyer said that Simpson was looking forward to reuniting with his family and moving back to Florida.

Simpson, onetime "Trial of the Century" defendant, was convicted on charges of armed robbery and assault with a deadly weapon in 2007. He robbed two sports memorabilia collectors at a Las Vegas hotel. Four other men joined Simpson at the time.

Simpson, 70, was granted parole earlier this year and he will now face five years of parole supervision.

"I'm not a guy who lived a criminal life. I'm a straight shooter," he said during his parole hearing in July.

In 1994, Simpson was accused of murdering his ex-wife, Nicole Brown Simpson, and her friend, Ronald Goldman. He was eventually acquitted a year later, after a trial that sparked a huge amount of controversy and shed light on the institutional racism of the Los Angeles Police Department.

Simpson was inducted into the Pro Football Hall of Fame in 1985. He was named football’s Most Valuable Player in 1973, and also won the Heisman Trophy for best player in college football in 1968 while at the University of Southern California. Simpson is 21st among NFL Rushing Yards career leaders with 11,236 yards. He also built a career in Hollywood, starring in the popular "Naked Gun" parody franchise and other films.