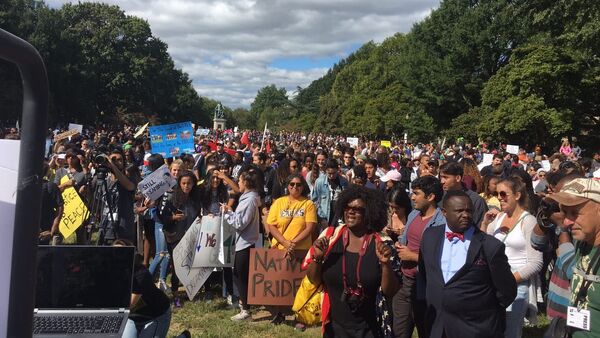 © Sputnik / Kristin Dailey
Subscribe
Thousands of protesters began marching toward the US Justice Department in Washington on Saturday to demand an end to racial injustice in the United States, a Sputnik correspondent reported.

Activists and performers rallied the crowd's enthusiasm by denouncing white supremacist policies in the United States. Speakers enjoined the racially mixed crowd to join hands with the people next to them for a moment of silence in remembrance of victims of racism. Speakers also denounced racial injustice, discrimination against immigrants and police brutality against African Americans.

We here at the March for Racial Justice pre-march rally! #M4RJ #BlackLivesMatter Trump & his racist supporters, we got 👀 on you! pic.twitter.com/DHyn4EUqjP

The message of March for Racial Justice's is to dismiss white supremacy across the country, the rally organizer Maurice Cook told Sputnik.

"The message is that all of us can come together and love, to fight against this racist regime, and to start the process of dismissing white supremacy," Cook said.

The rally organizer claimed that the Trump administration was a manifestation of white supremacy.

Excited to be at the March for Racial Justice! None of us is free until all of us are free!#M4RJ #BlackLivesMatter pic.twitter.com/zWxfc2hTOo

Native Americans also joined the protest against racial discrimination as they were the first victims of the US white supremacist system, Piscataway tribal leader Sebastian Tayac told Sputnik.

He stressed that people of color had been fighting against racial discrimination for generations.

"Message I have to send today is that we, as native people and the native people of this earth right here, we stand in solidarity with these calls for racial justice and an end to the white supremacy. Our struggle is united, our struggle is generational, meaning it stretches all the way back, and we fight the same way as our parents, our grandparents and our ancestors all the way back in the fighting," Tayac concluded.

#M4BW rally in Seward Square is filling up. At least 150 Black women and their supporters here. pic.twitter.com/dN6gunzUYO

At 12:00 p.m. local time, the two groups of protesters will begin marching on the US Department of Justice, and onward toward the National Mall.

At the March for Black Women in Washington DC. We will not be defeated! #M4BW #ladypartsjusticeleague pic.twitter.com/EpVB8Pl9DZ

Organizers of the two national protests chose September 30 as the date for their demonstrations to mark the Elaine Massacre in Arkansas in 1919, when white mobs lynched as many as 240 black sharecroppers who had demanded better pay from white plantation owners.

black #trans women are not a drip in the bucket of this movement — they are the bucket! #MarchForBlackWomen #M4BW #TransLivesMatter #shewoke pic.twitter.com/MyEyBIjwSA

The protests come as the nation debates a series of events that have cast a spotlight on the issues of racism, white supremacy and police brutality against minorities.

Going to march today in the March for Racial Justice. It is needed and the time is now! pic.twitter.com/omCkVLbZIC

In August, a white supremacist rally turned bloody in Charlottesville, Virginia. Fresh protests erupted this month in the US states of Missouri and Georgia over the killings of black men by white police officers. Last week, athletes in the country's National Football League ignited a national uproar by kneeling during the national anthem to protest against police killings of unarmed black men.