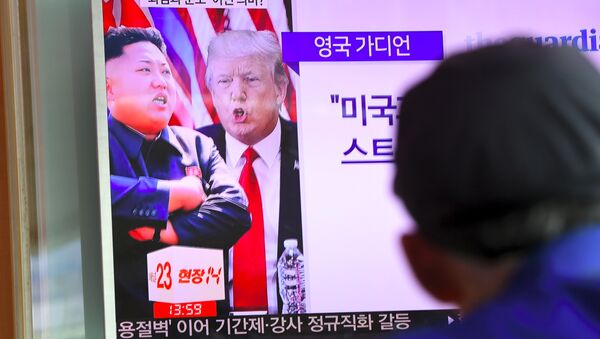 © AFP 2023 / JUNG Yeon-Je
Subscribe
International
India
Africa
The risk of war between North Korea and the United States is now unprecedented as Pyongyang is making rapid progress in the development of nuclear weapons and Washington keeps threatening a military solution to the crisis, an influential British think tank said in a report.

Such a conflict would likely result in "hundreds of thousands" killed and injured and there could be "far-reaching consequences" for the global economy, Malcolm Chalmers, Deputy Director-General of the Royal United Services Institute (RUSI), wrote in the analysis.

The author warns that taking into account the level of tensions between Washington and Pyongyang as well as the current impossibility of diplomatic alternatives, military measures could be taken by the US president. Trump and his advisers may wish to "resolve the issue sooner rather than later."

"War is now a real possibility. With North Korea making rapid progress in its missile and nuclear programs, time is not on diplomacy’s side," the report said.

According to Chalmers, the war could start in a number of ways. Pyongyang could attack first if it believed Washington was preparing an attack; or the US could launch an attack if the North fired missiles into the ocean near Guam or California.

Asia
‘Tame' Trump: 4.7 Million North Koreans Reportedly Ready to Volunteer for War
"If war were to begin, it is likely to involve large-scale US-led air and cyber offensive during the early stages, followed by massive North Korean retaliation against South Korea and US bases in the region, using conventional, chemical and possibly nuclear weapons. Under these circumstances a full-scale invasion of North Korea would be highly likely," the report said.

Tensions on the Korean Peninsula remain unprecedented as Washington and Pyongyang continue their exchange of threats and bellicose statements.

'Erupting the Will for Revenge'

Meanwhile, a North Korean state-run outlet on Friday bashed the recent flight drill of US strategic bombers and fighters near the North Korean coast, calling it a "provocation," according to Yonhap.

Trump on North Korea's Leader: 'Little Rocket Man' Won't Be Around Much Longer
"The independent sortie of a US B-1B Lancer strategic bomber squadron over international waters in the East Sea is an extremely dangerous act, designed to drive the situation of the Korean Peninsula to extremes. … The US belligerent bravado will only fiercely erupt our will for revenge," Uriminzokkiri, a website providing news from North Korea’s Central News Agency (KCNA), said.

Over the weekend, US Air Force B-1B Lancers and South Korean F-15 fighter escorts went north of the demilitarized zone dividing North and South Korea in a flight route and flew along North Korea's east coast.

On Tuesday, President Trump reiterated that the US is ready for the "military option" to resolve the crisis.

"We are totally prepared for the second option, not a preferred option. If we take that option, it will be devastating, I can tell you that, devastating for North Korea. That's called the military option," Trump said during a news conference at the White House's Rose Garden.