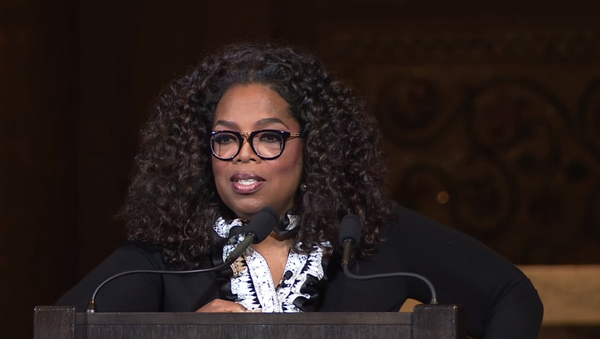 The 63-year-old Oscar nominee set Twitter ablaze Thursday night with her response to a John Podhoretz column in the New York Post about how Winfrey just might be the only one with enough star power to help Democrats in 2020.

​The queen's response was simple, yet suggestive.

"Thanks for your VOTE of confidence!," the "Greenleaf" actress wrote.

What does this mean? Is Her Majesty running?

​As netizens typically do, they weighed in on the matter.

​​But it wasn't all a negativity fest: some were happy about the possibility.

​Others didn't really take a side, but instead shed light on what Americans of only a decade past would've thought. Ah, how the mighty have just utterly lost it.

​Though Winfrey has laughed off suggestions over the years that she might one day join the political fray, her feelings might be changing. Back in March, she told Bloomberg that Donald Trump's shocking 2016 presidential victory made her realize she might have been underestimating her chances.

There might be even more convincing evidence of a burgeoning #Winfrey2020 campaign. Last Sunday, the Mississippi-born celeb appeared on CBS' 60 Minutes for the very first time to talk to supporters and opponents of Trump.

​Nothing is concrete, and only time will tell who 45's opponent will be in 2020 — that is, if POTUS himself makes it that far.