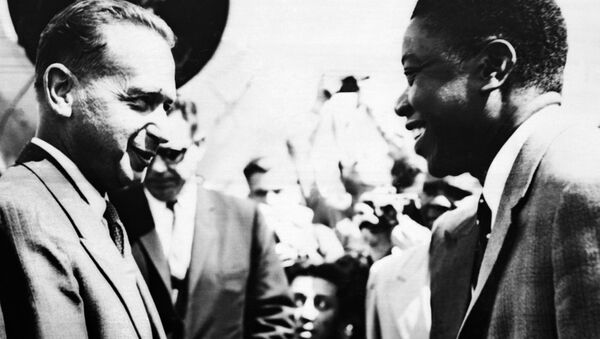 © AFP 2022
Subscribe
A United Nations investigation into the death of Secretary General Dag Hammarskjold in 1961 could be edging closer to solving the mystery. It is understood the UK and US intelligence services could be sitting on vital evidence.

The death, in a plane crash, of UN Secretary General Dag Hammarskjöld in 1961 has been a mystery ever since but a new investigation could be edging closer to solving it.

Research by Swedish aid worker Goran Bjorkdahl and Susan Williams, a senior fellow at the Institute of Commonwealth Studies in London, has forced the UN to reopen the case.

"My own conclusion… is that Hammarskjold's DC6 was brought down and that the motive was to maintain the west's control over Katanga minerals. It is significant that the UN, after Hammarskjöld's death, has become less of a challenge to the big powers," wrote Bjorkdahl back in 2011.

#Quote of the week from Dag #Hammarskjöld: “Nobody can serve in that capacity [as UNSG] without a sense of gratitude…” #Dagquote pic.twitter.com/DqWHUUjg3c

The Crash and Othman's Report

Hammarskjold, a Swedish diplomat, and 15 other people were killed when their plane came down in the jungle as it approached Ndola in what was then Northern Rhodesia, but is now Zambia.

Hammarskjold died in September 1961, nine months after Patrice Lumumba, the left-wing prime minister of the Republic of Congo, was ousted and executed by forces backed by the US.

In 2015, then Secretary General Ban Ki-Moon ordered a fresh investigation into the crash.

A report, written by a former Tanzanian judge, Mohamed Chande Othman, was handed to UN Secretary General, Antonio Guterres, in August, and it allegedly says there is a "significant amount of evidence" his plane was brought down by another aircraft.

Lumumba had been trying to take on separatist rebels from the southern province of Katanga, who were backed by western mining interests and foreign mercenaries.

Hammarskjold, who took over at the UN in 1953, was on his way to negotiate with the rebels when his Douglas DC6 plane crashed.

Othman's report, which was assisted by cooperation from the British, Belgian, Canadian and German governments, points out that in February 1961 the French government had secretly supplied the rebels with three Fouga planes.

These planes were involved in air-to-air attacks, flown at night and from airstrips cut out of the jungle in Katanga.

The Guardian newspaper claimed Othman's report contains evidence which backs up an account from a French diplomat, Claude de Kemoularia, who said he was told by a Belgian pilot in 1967 that he had accidentally clipped the wing of Hammarskjold's plane while trying to stop it landing at Ndola.

#UNSG @antonioguterres was the first amongst many who honoured Dag Hammarskjöld over the past two weeks. https://t.co/7yWFw6RqR7 pic.twitter.com/Ep7lpqetKO

Othman has also said the British and Rhodesian authorities were intercepting UN communications at the time of the crash and Britain probably still had crucial evidence in its classified archives.

He also learned the US was operating sophisticated electronic surveillance aircraft "in and around Ndola" at the time.

Two British inquiries into the crash have pointed to pilot error, but the UN itself has never reached a conclusion.

The Katanga crisis lasted until 1965 when the chief-of-staff of the army, Colonel Joseph Mobutu Sese Seko, took over and reabsorbed the rebel province into the Congo, which he renamed Zaire.