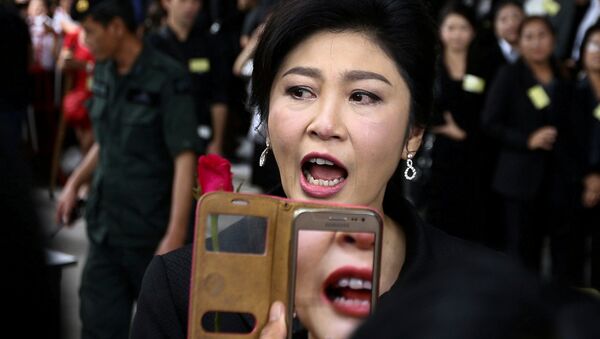 The former Prime Minister of Thailand, Yingluck Shinawatra, was jailed in absentia for five years by a court on Wednesday, September 27. Now, like her brother Thaksin, she has gone into exile, leaving a country which is deeply divided.

The former prime minister of Thailand, Yingluck Shinawatra, has been given a five-year jail sentence for her role in an allegedly corrupt scheme involving subsidies to rice farmers. Yingluck and her brother Thaksin were politicians who polarized Thailand, engendering adoration among their supporters and loathing among their opponents.

"The court found that the defendant is guilty as charged and the court has sentenced her to five years in prison and the court also unanimously agreed that the sentence will not be suspended," said the head of Thailand's Supreme Court on September 28.

Prosecutors claimed the rice subsidy scheme was mismanaged and cost Thailand US$8 billion but it shored up Yingluck's Pheu Thai Party's support in the north-east.

In Her Brother's Footsteps?​

But she had already fled the country amid reports she is either in Dubai or London.

Yingluck, 50, had not attended court hearings, fueling rumors that she had fled abroad, like her brother.

In 2007, Thaksin fled to the UK and while there bought Manchester City football club for £81 million (US$108 million). A year later he sold the club on to investors from Abu Dhabi, making a profit of £20 million ($26 million) on the deal. Thaksin is now believed to be living in Dubai, although he has occasionally be seen in Cambodia, Thailand's neighbor to the east.

Yingluck was ousted by a military coup in May 2014, three years after being elected as Thailand's first female prime minister. It was the 12th coup since 1932.

Yingluck's opponents, including many in the middle classes and in Bangkok, claimed she was a puppet for her brother Thaksin, who was himself ousted by a coup in 2006.

Police arrive today at Yingluck Shinawatra's Bangkok home to search for evidence relating to her flight from justice pic.twitter.com/SAtu3ppYSC

​The Shinawatras remain hugely popular in the Thai countryside, especially in the impoverished north-east, where they were perceived as trying to help poor peasants at the expense of the wealthy, especially in Bangkok.

Thaksin himself remains one of Thailand's richest men and their opponents have always claimed their real agenda was to enrich themselves through corruption.

In 2010 dozens of "redshirts" — supporters of Thaksin — were massacred after they came to Bangkok and demanded fresh elections.

In May 2014, the army installed General Prayut Chan-o-cha as the new prime minister and he banned political parties, including Yingluck's Pheu Thai Party, and forced through a new constitution before calling new elections, which are due late next year.

But opposition activists are already saying they believe the army will push back the elections in a bid to hold onto power and keep out the "redshirts."

@Reuters in Dubai reporting that Yingluck left Dubai since Sept. 11 and went to London.

Thailand was plunged into grief and he was eventually replaced by his son, Crown Prince Vajiralongkorn, who is widely reviled across Thailand.

The establishment, which includes the army, the upper and middle classes and the Royal family, has closed ranks, fearing Thaksin would try to reclaim power and possibly even turn the country into a republic.