Every Move Against Russian Media in US Will Have Relevant Response 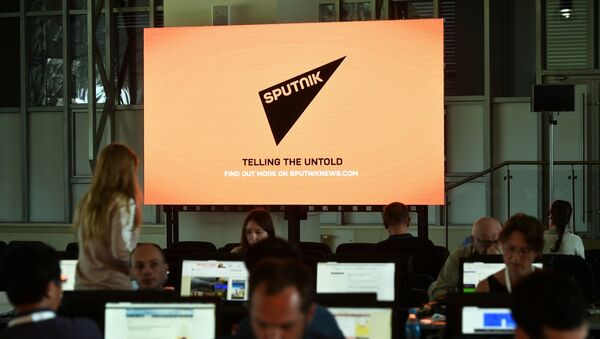 © Sputnik / Maksim Blinov
/
Go to the photo bank
Subscribe
Russian Foreign Ministry commented on the US Department of Justice's demands to register RT America channel's services provider as a foreign agent under FARA, saying that every move in relation to a Russian media will have a relevant response.

MOSCOW (Sputnik) — Moscow will take the necessary measures against the US-funded media having an audience in Russia, if Washington does not end its pressure on RT and Sputnik, Russian Foreign Ministry spokeswoman Maria Zakharova said Thursday.

"There is a high number of the Russian-speaking information resources that have their audience on the Russian territory, which receive financial support from the United States. Nevertheless, they are not considered as foreign agents, they conceal their sources of financing, and they do not register as foreign agents… When the law is perverted and turned into a tool of destroying TV broadcasters, every move in relation to a Russian media will have a relevant response. Washington must calculate thoroughly, whom this response will concern. The countdown starts now," Zakharova said, commenting on the situation around the operation of Sputnik and RT in the United States.

The diplomat added that Russia had repeatedly proven its commitment to all the international norms, including those in the area of freedom of speech.

"The selective and obviously politically motivated law implementation in relation to the Russian media would mean the limitation of the freedom of speech guaranteed by the US constitution. The implementation of the FARA toward RT threatens to result in serious legal consequences and is related to risks to the employees’ security. The obligations to disclose the internal data of the broadcaster, including, I emphasize, the staff schedule, and personal data of the employees may represent the real threat amid the ‘witch hunt’ established in the United States," Zakharova added.

Previously, three Democratic congressmen wrote a letter to the Federal Communications Commission calling for an investigation into Radio Sputnik's alleged interference in the US 2016 presidential elections.

On September 11, RT America channel's services provider in the US received a letter from the US Department of Justice demanding that the company should register under the Foreign Agents Registration Act (FARA). The letter was received amid the discussions on a bill in the US lower house aimed at amending requirements for registration of foreign agents under FARA.

The bill, among all, empowers the US DOJ, including the Federal Investigations Bureau (FBI), to identify and prosecute organizations that "illegally" try to influence the political processes in the United States.