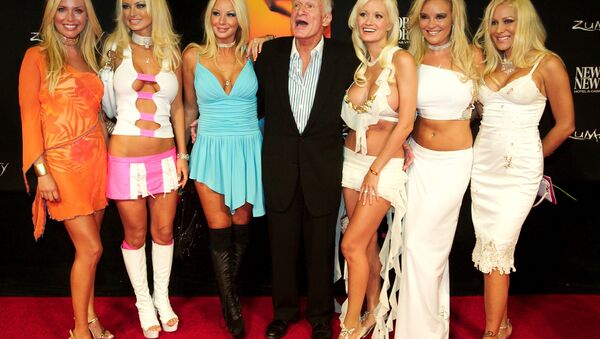 © REUTERS / Ethan Miller
Subscribe
Hugh Hefner, the founder of the Playboy empire, passed away on Wednesday night, September 27. Sputnik found out some things about Playboy you might not know.

Hugh Hefner, who has died aged 91, published the first issue of Playboy magazine in 1953 and went on to make millions of dollars out of images of glamorous women leaving little to the imagination.

Hugh Hefner was born in Prohibition-era Chicago, when Al Capone and his gang were running the city.

But young Hugh was brought up by strict Methodist parents. His mother Grace was of Swedish origin and his father Glenn was the descendant of German immigrants.

Say what you will about this man. Hugh Hefner changed everything. Lived an awesome life. #RIPHef (1926-2017) pic.twitter.com/Fa6yLaPRxR

RIP to the legendary Hugh Hefner! I’m so honored to have been a part of the Playboy team! You will be greatly missed! Love you Hef! Xoxo

Young Hefner scored an IQ of 152 while at school, and created a school newspaper and a child-friendly comic book called School Daze.

Then he discovered the opposite sex…

After being discharged from the US Army a year after the end of the Second World War, Hefner studied briefly at the Chicago Art Institute before switching to the University of Illinois, where he majored in psychology.

For his degree he focused heavily on the work of Alfred Kinsey, the father of research into sexuality and sexual arousal.

While there he met the first of his many wives and girlfriends, Millie, whom he married in 1949.

Magazine Named After a Car

By the early 1950s Hefner had decided to launch his own magazine, which would he hoped would surf the wave of sexual liberation he sensed would arrive in the United States after the austerity and puritanism of the war and immediate post-war years.

He raised US$8,000 — a considerable sum of money in those days — from 45 investors and originally planned to call the magazine Stag Party.

But Stag magazine threatened to sue for copyright infringement and a friend suggested renaming it Playboy.

Rest easy to not only my hero but to one of the biggest pimps to ever live. You'll be missed. #RIPHefner pic.twitter.com/mP9HztI4xt

The title came from a Buffalo, New York-based car company who briefly produced convertibles from 1947 until they went bust in 1951.

Hefner liked the name and the rest is history.

Playboy magazine's heyday was in the 1960s and early 1970s and it managed to combine images of scantily clad women with intelligent and at times investigative journalism.

Over the years dozens of famous actresses, singers and models have appeared on the cover, including Nancy Sinatra, Madonna, Naomi Campbell, Kate Moss, Cindy Crawford, Drew Barrymore and Pamela Anderson.

Goodbye #Hef
Mr Hefner
I have so many thoughts, I have no brain n right now to edit
I am me… https://t.co/z1PPEiagaI

Playboy's objectification of women — who also appeared in bunny costumes in Playboy nightclubs — infuriated feminists such as Gloria Steinem who went undercover to expose the lechery and groping which the girls had to endure.

Goodbye #Hef Mr Hefner I have so many thoughts, I have no brain n right now to edit I am me because of you You taught me everything important about freedom and respect. Outside of my family You were the most important person in my life. You gave me my life… People tell me all the time That I was your favorite… I'm in such deep shock. But you were old, your back hurt you so much. Last time I saw you You were using a walker. You didn't want me to see. You couldn't hear. You had a piece of paper in your pocket you showed me — with my name Pamela with a heart around it. Now, I'm falling apart. This feeling is so crazy. It's raining in Paris now. I'm by the window. Everything anyone loves about me is because you understood me. Accepted me and encouraged me to be myself. Love like no one else. Live recklessly With unfiltered abandon. You said the magazine was about a girl like me. That I embody the spirit you fantasized about. I was the one. You said. I can hear you say — Be brave. There are no rules. Live your life I'm proud of you. There are no mistakes. And with men — Enjoy… (Your wonderful laugh) You have the world by the tail You are a good girl And you are so loved — You are not crazy. You are wild and free Stay strong, Stay vulnerable…. "It's movie time" You loved my boys… You were always, always there for us. With your love Your crazy wisdom. I will miss your everything. Thank you for making the world a better place. A freeer and sexier place. You were a gentleman charming, elegant, chivalrous And so much fun. Goodbye Hef… Your Pamela 💋

The magazine remains banned in many countries around the world, including India.

Playboy was actually very tame compared to pornographic magazines like Hustler and Swank, and even its great rival Penthouse.

Bought Grave Next to Marilyn Monroe

Hefner is going to be buried next to the woman whose pictures were on the first cover of Playboy, Marilyn Monroe.

Marilyn Monroe helped build #HughHefner 's Playboy empire by being the very first centerfold. Now he will be laid to rest next to her. RIP pic.twitter.com/ECfxarysRi

That may come as a slap in the face to Hefner's three wives.

He divorced Millie — who bore him two children — in 1959, after a decade of putting up with his infidelity.

Crystal, who was 60 years his junior, will no doubt await the reading of his will with interest.

He was worth US$50 million.