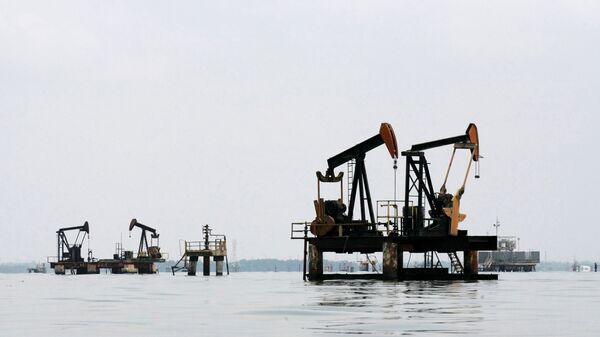 © REUTERS / Isaac Urrutia/File Photo
Subscribe
International
India
Africa
Venezuela has recently begun pricing its crude oil in the yuan in a bid to circumvent US sanctions. As a Latin American country heavily relying on oil exports, Venezuela's decision came as a surprise.

The move comes amid an increasingly tense relationship between Venezuela and the US. Last month, the US announced new economic sanctions on Venezuela, restricting trading of Venezuelan bonds and securities issued by the government in the US financial markets to raise money. Venezuelan President Nicolas Maduro said earlier this month that "Venezuela is going to implement a new system of international payments and will create a basket of currencies to free us from the dollar."

Undoubtedly, it is risky for a country with a tense relationship with the US to hold large amounts of dollar-denominated assets. For a country like Venezuela, oil is a major source of income. Venezuela relies on oil for about 95 percent of export revenues, and the US is the country's largest trading partner, meaning lots of dollar-denominated income from oil trading.

Venezuelan President Commits to Pricing Oil in Yuan to Counter US Sanctions
Since Venezuela cannot keep all of its dollar reserves in cash, it faces a big problem in dealing with vast amounts of dollars. Should it put this money into banks or buy various dollar-denominated assets? No matter which form the money is kept in, those dollar-denominated assets are always under the oversight of the US financial system. If the US wants to implement sanctions on Venezuela by freezing its assets, it will be hard for the country to protect its fortune.

It is for this reason that oil-producing countries like Iran, Venezuela and even Russia, which all have poor relations with the US, have decided to settle their energy exports in yuan, mainly for the purpose of asset security. The central banks of China and Russia have been developing ruble-yuan swaps for quite some time, according to media reports.

Given these factors, Venezuela will benefit by pricing its oil in the yuan, but it will sustain heavy losses when pricing the oil in a weak currency.

As for China, Venezuela's inclination to hold more yuan-denominated assets shows the improvement of the yuan's internationalization, which is conducive to promoting the yuan's global use.

Breaking the Habit: Venezuela Reportedly Stops Using US Dollars in Oil Trade
China has made great efforts in promoting the settlement function of the yuan in global trade, but the pricing function is an integral part of the yuan's internationalization. Chinese regulators plan to launch a crude oil futures contract denominated in the yuan, in an aim to break the petrodollar's monopoly.

Some people may worry that Venezuela's yuan-denominated pricing could cause exchange-rate trouble for Chinese oil companies that ship Venezuela's oil to the US. But that is probably not the case. According to an earlier oil-for-loans agreement, the China Development Bank provided loans to Venezuelan state development bank Bandes, and Venezuelan state-run oil company PDVSA supplied oil to PetroChina America in lieu of cash. PetroChina exported part of the fuel to the US. The agreement indicated that there was no need for PetroChina to exchange currency during the deal. Nevertheless, due to US sanctions, PetroChina advised its US unit to avoid involvement in future loans to the country, according to a Bloomberg report.

The yuan is not as liquid as the US dollar. But for countries such as Venezuela, this is not a problem. With close trade ties with China, Venezuela can use its holdings of yuan for trade settlement, buying industrial products from China.

As the global monetary system has become increasingly diversified, the international status of the yuan, the euro, the yen and other currencies continues to improve. Venezuela won't be the last country to counter US sanctions by using the yuan or other currencies in energy export settlements.

This article, compiled by Global Times reporter Wang Jiamei based on an interview with Zhou Yu, director of the Research Center of International Finance at the Shanghai Academy of Social Sciences, was originally published in the Global Times.