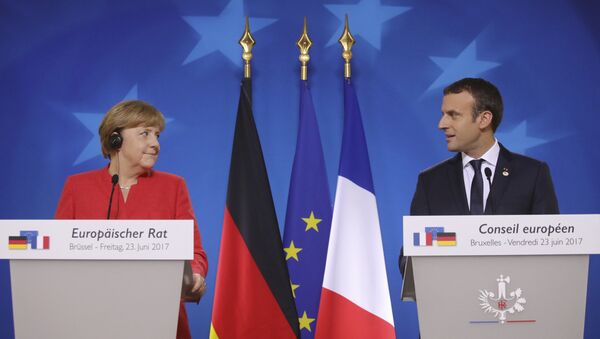 On Tuesday French President Emmanuel Macron delivered a nearly two-hour speech, in which he laid out his vision for the future of Europe. The most controversial issue the president touched upon was the European cooperation on defense and namely, his aspiration to create joint armed forces, common defense budget and doctrine for actions.

PARIS (Sputnik) — French President Emmanuel Macron said on Tuesday in a speech at the Paris-Sorbonne University that in the beginning of the next decade the European Union would need common Rapid Reaction Forces, a single defense budget and a common doctrine for action. The president also noted that the bloc should create common civil defense forces and joint border police.

Macron said that the aim of a joint military force is that the EU would be able to act autonomously. However, he stressed that the common army should not replace NATO forces but rather complement alliance's military capabilities.

In June, the European Commission decided to launch the European Defense Fund, designed to supplement member states’ defense research and support the countries of the Union in obtaining military equipment. Shortly after the announcement, European Commission President Jean-Claude Juncker said that Europe can no longer "outsource" its defense in a changing global landscape and has to take the matter in its own hands.

EU Needs Power Repatriation Reforms as Merkel, Macron Mull Changes – EU MP
However, such initiatives encountered critique from the UK as the country has repeatedly warned that common defense forces could undermine NATO.

Macron, in his run for the presidency, made the European reform the central pillar of his campaign. There is no denying the fact that in his bid he put high hopes on his key ally German Chancellor Merkel. But some days after Sunday's parliamentary elections in Germany political landscape in the country has changed significantly. Eurosceptic party Alternative for Germany is on the rise, while Merkel's CDU/CSU bloc got its worst result since 1949.

Apparently Merkel now has less room for maneuver than the French president could expect. But instead of tailoring his speech to the changing circumstances Emmanuel Macron presented broad and far-reaching vision. The French president expressed hope that his ideas would be taken into account in Germany during the coalition building negotiations.