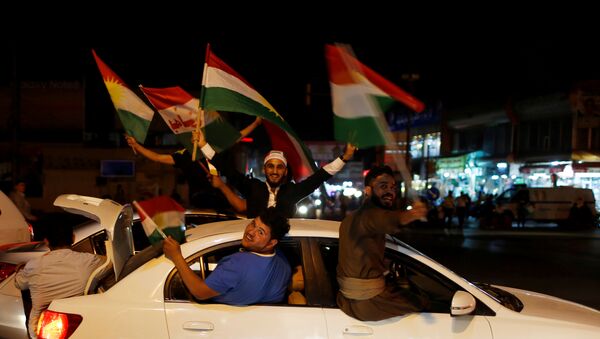 The Iraqi Kurdistan independence vote has been severely criticized by Baghdad, as well as by Iraq's neighbors, the US and the United Nations. Baghdad has refused to recognize the Kurdish referendum as legitimate and is not going to engage in negotiations with the authorities of Iraqi Kurdistan thus prompting unilateral actions.

MOSCOW (Sputnik) — Iraqi Kurdistan may unilaterally declare the region's independence from the central government if Baghdad refuses to recognize the outcome of the recent independence referendum, Iraqi Kurdistan's representative to Russia and the Commonwealth of Independent States Khoshavi Babakr told Sputnik on Wednesday.

On Wednesday, the Iraqi parliament instructed the country’s government to not enter in a dialogue with Iraqi Kurdistan authorities until the cancellation of the results of the region’s independence referendum held on Monday, according to the parliament’s document, seen by Sputnik.

"This will be seen in the course of negotiations, if Iraq insists on a categorically denial of [our independence], then we will eventually have to declare independence unilaterally. I do not rule this out. Our plan for the future is to see the reaction of other countries, [to see] which countries will recognize [the state of Kurdistan]. We have to negotiate with neighboring states, with world powers, with the United Nations, and in the end to settle this issue," Khoshavi Babakr said.

The Kurdish official added that the military conflict between Baghdad and Erbil could take place, but its possibility was not very high over a number of reasons, such as the fatigue of the Iraqi population from the struggle against terrorist groups. He also believes that international forces will not allow a new conflict, however, if there is one, then Kurds are ready to defend themselves

Turkish MP Slams Kurdish Referendum as 'Neither Constitutional, Nor Legitimate'
The representative of the Iraqi autonomous region called Baghdad's steps against the Kurds taken after the referendum "attempts [aimed] at carrying out genocide" and thus stressed that no one should support the central Iraqi government.

According to the parliament’s document, seen by Sputnik, the Iraqi parliament also ordered the government to return oil fields in regions disputed with the Kurds to Baghdad’s control. Earlier Turkish President Recep Tayyip Erdogan threatened to stop oil transit via its territory in response to the Iraqi Kurdistan referendum. Babakr assumed that oil from Iraqi Kurdistan could be exported through Syria with Russia's assistance if Turkey takes steps to stop the oil transit from the region using its territory.

The Kurdish official added that Iraqi Kurdistan had oil resources, while a number of energy companies, such as Chevron and Exxon Mobil, needed this oil and would not be ready to withdraw from the region giving their business rivals a chance to make profits. According to Babakr, the threats of neighboring states, such as Turkey to introduce economic blockade against Iraqi Kurdistan, will not come to life as the neighbors mostly export their goods and services to Iraq's autonomous region and these steps would harm the economic interests of domestic producers in these states and could even cause instability in the Kurdish-populated areas that focus on trade with Iraqi Kurdistan.

'Good Cop, Bad Cop': US, Israel 'Interested in Creation of Kurdish State'
The decision to hold the independence referendum was made by authorities of Iraqi Kurdistan in June. Following the announcement, the Iraqi government, as well as a number of foreign countries, including Turkey and the United States, have criticized the move.

According to the final results of ballot counting reported by the Independent High Elections and Referendum Commission, 92.7 percent of voters supported the regional independence from Baghdad.

After the vote, Baghdad refused to recognize the referendum as legitimate and stressed that it would not conduct talks with Erbil on the issue of the vote. It has also taken a number of steps following the vote, such as suspension of all international flights to the airports located in the autonomous region and announced plans to start legal proceedings against the organizers of the plebiscite.