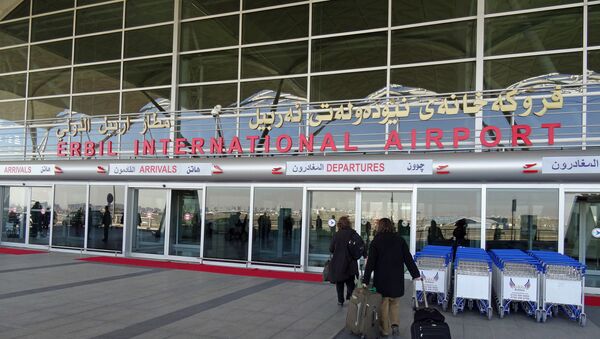 MOSCOW (Sputnik) — The Iraqi Civil Aviation Authority (IraqCAA) said in a statement on Wednesday that all international flights to and from Erbil and Sulaymaniyah airports will be suspended starting from Friday.

"IraqCAA would like to draw your attention for the following, starting from Sep 29. 2017 at 1500 UTC, 1800 LT all flight operations to and from Erbil and Sulaymaniah airports are suspended except for Iraqi carriers for internal flights only (domestic flights) and until further notice," the statement reads.

Meanwhile, on Monday, the independence vote took place in Iraq's autonomous region of Kurdistan as well as in the disputed areas de jure controlled by Baghdad but under de facto control of Kurdish authorities. After 9 percent of votes had been counted, more than 93 percent of voters backed the independence of the region. Iraqi authorities said that the referendum was not legitimate and stressed that they would not conduct talks with the authorities of Iraqi Kurdistan on the issue of the vote.