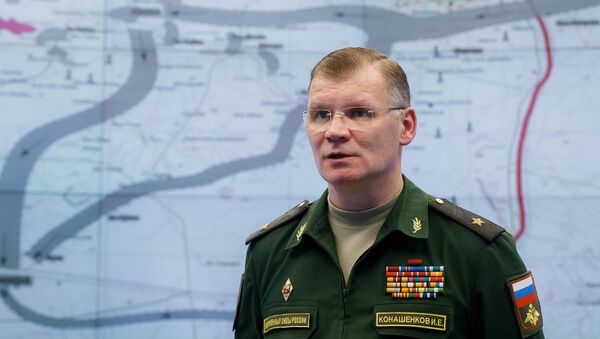 Russian Ministry of Defense refutes the allegations that Moscow has conducted strikes on settlements in the Syrian province of Idlib claiming that objects destroyed by Russian jets not only were all located far from settlements but also were used by terrorists during the attack against Russian military police in Hama.

"The aircraft of Russian Aerospace Forces do not strike settlements in the Syrian Arab Republic. The statements of the Observatory citing unnamed 'witnesses' and 'volunteers' are unsubstantiated as usual and serve as 'information cover-up' for actions of Al Nusra Front [a terrorist group] militants," Konashenkov said.

He said that over the past 24 hours, the Russian jets carried 10 strikes on terrorists positions in the Idlib province following reconnaissance sorties of drones and additional confirmation through other channels.

What's Behind al-Nusra Front Attack on Russian Military Police in Idlib
Konashenkov explained that the targets included underground bases of militants, located far from residential neighborhoods, field ammunition depots, armored vehicles, multiple launch rocket systems and sweatshops for loading guns on cars which were used during both preparations and offensive of the terrorists against positions of the Russian military police in the north of Hama province in order to take Russian servicemen hostage. He noted that the ministry had the objective monitoring data for all the strikes.

On Wednesday, the Russian General Staff said that Nusra Front launched the attack with support of artillery, tanks and infantry fighting vehicles on September 19 and managed to penetrate Syrian army defenses to the depth of some 7.5 miles. The General Staff added that the offensive was initiated by US special services to stop the Syrian Army advance east to Deir Ez-Zor.