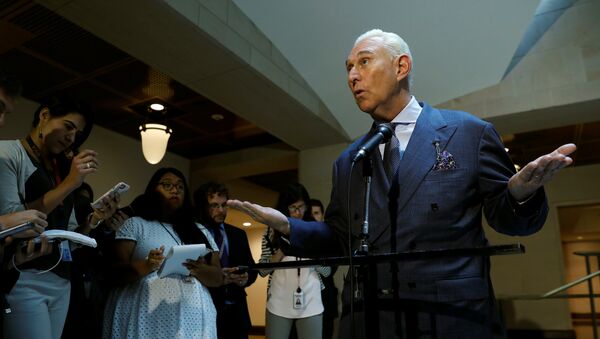 © REUTERS / Kevin Lamarque
Subscribe
Famously brash Republican strategist and US President Donald Trump supporter Roger Stone delivered explosive testimony before the House Intelligence Committee (HIC) Tuesday, accusing the committee and others of spreading falsehoods to prop up the story of alleged Russian interference into the 2016 US presidential election.

Stone, who served as an adviser on the Trump campaign in its earliest days before leaving under controversial circumstances in August 2015, was one of the first to be accused of collusion with the Russian government. Hillary Clinton campaign chairman John Podesta accused Stone of having prior knowledge that his emails had been hacked, and that the Russians were the ones who stole them. Stone denied both allegations.

The famously flamboyant Stone accused members of the HIC of making "irresponsible, indisputably and provably false statements in order to create the impression of collusion with the Russian state without any evidence that would hold up in a US court of law or the court of public opinion." 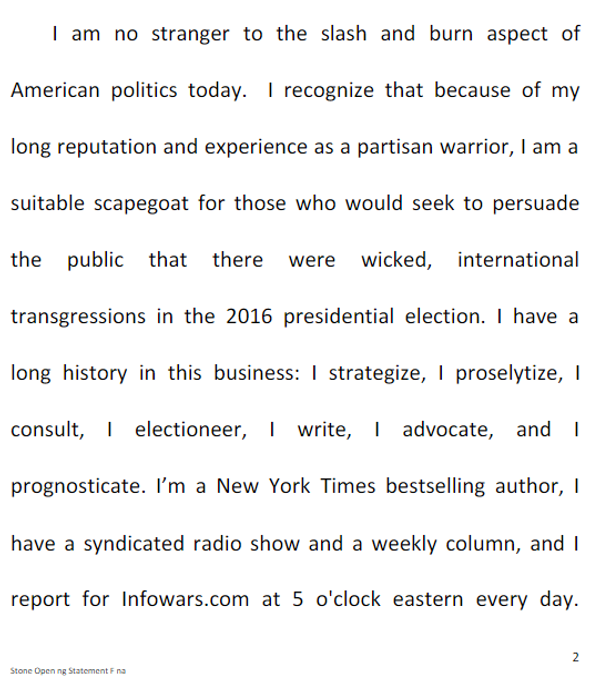 Stone, who worked for Republican presidents Richard Nixon and Ronald Reagan, vehemently denied that he was sympathetic to Moscow. "As someone whose political activism was born from the anti-communism of Senator Barry Goldwater and President Ronald Reagan; and whose freedom-seeking family members were mowed-down by Russian tanks on the streets of Budapest in 1956, I deeply resent any allegation that I would collude with the oppressive Russian state to affect the outcome of the 2016 presidential election."

Stone admonished the HIC for their investigation into individuals like Michael Caputo — a communications adviser on the Trump campaign who says he had to liquidate his children's college fund to pay for a lawyer to defend himself from allegations of Russian collusion. Stone said that similar allegations had been made against him, equally erroneously.

But it wasn't just Congress that Stone went after: "On January 20, 2017, the New York Times reported that the intelligence services were in possession of emails, records of financial transactions and transcripts of telephone intercepts, which proved that Roger Stone, Paul Manafort and Carter Page colluded with the Russians for the benefit of Donald Trump. So, where are these records? Can this committee or our intelligence agencies produce them? I didn't think so."

Stone said that there was no evidence of Russian hacking of the Clinton campaign or the Democratic National Committee. "I recognize that those who believe that there was collusion between the Trump camp and the Russian state now say Stone, 'MUST HAVE' been involved, but that is not based on one shred of evidence. This is nothing more than conjecture, supposition, projection, allegation, and coincidence, none of it proven by evidence or fact."

"The mantra-like repetition of the claim by our vaunted 17 intelligence agencies that the 'Russians' colluded with the Trump campaign to affect the 2016 election, does not make it so. These are, after all, the same entities who insisted the North Koreans would not be able to launch a viable rocket for three to five years, that insisted Saddam Hussein was in possession of [weapons of mass destruction] that there was no torture at Abu Ghraib prison, and that the government had no bulk data collection program, until Edward Snowden revealed otherwise."

Stone debunked the claim that he had known about the Podesta leak in advance, saying that he had never said anything to suggest any such thing and there was no evidence that he did. Stone, who in March tweeted that he had a "perfectly legal back channel to [Wikileaks founder Julian] Assange," said that he had never directly communicated with Assange, instead trading information through a journalist intermediary.

Stone called the allegations that he had colluded with Russia "the worst sort of neo-McCarthyism." He added that he had "never represented any Russian clients, have never been to Russia, and never had any communication with any Russians or individuals fronting for Russians, in connection with the 2016 presidential election."

Stone concluded his statement by admitting that he believed there was "a foreign nation which was colluding with a presidential campaign in an attempt to influence the outcome of the 2016 presidential election. Therefore, I strongly urge this committee to investigate the numerous, publicly documented contacts between Ukraine and the Clinton campaign, particularly in light of recent public reports that Ukraine is now providing sophisticated missile technology to North Korea. Please do not continue to perpetuate falsehoods here today."