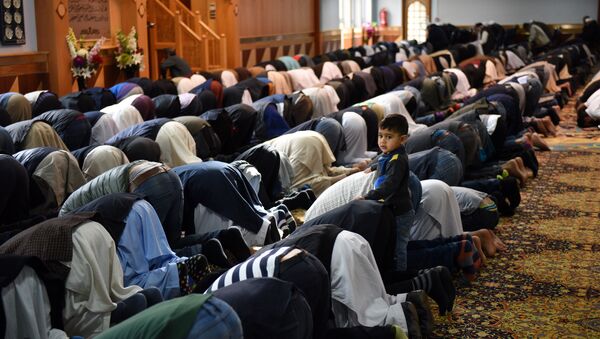 © AFP 2021 / OLI SCARFF
Subscribe
A Muslim orthopedic surgeon who treated victims of the Manchester Arena bombing at an Ariana Grande concert in May was stabbed in the neck on Sunday as he entered a mosque in what police are labeling a hate crime attack.

Syrian-Jordanian Nasser Kurdy, a father of three, was walking into the Altrincham Islamic Centre in Hale, Cheshire, for mid-afternoon prayers just before 6 p.m. when he was stabbed.

The 58-year-old victim said, "God was merciful to me yesterday. It could be a nerve, an artery, a vein, the gullet. The neck is the contact between the body and your head, but fortunately it was just the muscle," The Independent reported.

"As I entered the grounds of the premises, I felt that pain and the blow to my neck."

"I turned around and saw this gentleman in a threatening pose. I did feel threatened, I did feel vulnerable."

Kurdy also added that he has forgiven his attacker, 28-year-old Ian Anthony Rock, who was charged on Monday with assault and possession of a lethal weapon.

"He is not representative of what this country stands for. I have absolutely no anger or hate or anything negative towards him. I have declared it, I have totally forgiven him."

"He could be a marginalized person within his own community," Kurdy added.

Rob Potts, assistant chief constable of GMP, is not surprised that there has been a surge of hate crimes recently.

"Greater Manchester has a diverse population, with people from different faiths and backgrounds, and this is something that we are proud of. It's what makes us the city we are. We will not tolerate hatred or discrimination of any kind," Potts said.

"When a major tragedy occurs such as the attacks in Manchester and London, it is sadly not unusual for there to be a spike in the amount of hate crimes, specifically against race and religion, but thankfully they do decrease again quickly," he added.

UK Home Secretary Amber Rudd has vowed extra policing resources "for as long as it is needed" to assure Muslims' safety. This pledge came after the deadly Finsbury Park attack on June 19, during which a van was rammed into pedestrians in Finsbury Park near the Muslim Welfare House and the Finsbury Park Mosque. One man died and 11 were injured in the terrorist attack.