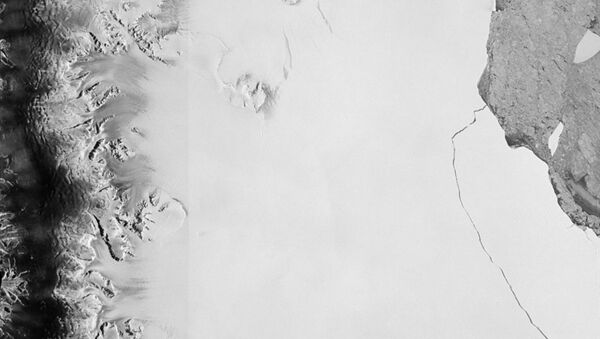 This calving, as the process of shedding huge blocks of ice is called, comes after a 225-square-mile iceberg fell off the same glacier in 2015.

Pine Island Glacier — four times the size of Manhattan — is the fastest melting glacier in West Antarctica, with 45 billion tons of ice melting each year. These add up to 1 millimeter of global sea rise every eight years, Gizmodo reported.

A study by Seongsu Jeong and Ian Howat of Ohio State University uncovered that rifts in the glacier were being formed in its center rather than at its edges, which suggests that warming waters in contact with the base of the glacier may play a role in how the ice sheet is melting.

"Rifts usually form at the margins of an ice shelf, where the ice is thin and subject to shearing that rips it apart," said study lead Ian Howat, an associate professor of earth sciences at Ohio State University.

The latest cleavage, which has led to an open-water gap between the ice shelf and the iceberg, is the fifth-biggest calving event since 2000, according to Stef Lhermitte, a satellite observation specialist at Delft University of Technology in the Netherlands.

"But it isn't the size of the [ice]bergs that are the main issue," Christopher A. Shuman, a research scientist within the Cryospheric Sciences Laboratory at NASA Goddard Space Flight Center, told Gizmodo. "It is the overall progressive retreat of the ice front with calving losses in 2013, 2015 and 2017, which is pretty rapid retreat for any very large glacier, especially one this far south in Antarctica. With the first big loss in 2001, this is not a good sign for sure."

Studies predict that the West Antarctic Ice Sheet, the continental ice sheet that covers West Antarctica, where the Pine Island Glacier is located, will collapse within 100 years, resulting in a sea rise of nearly 10 feet that could lead to flooding in major US cities like New York and Miami, weather.com reported.