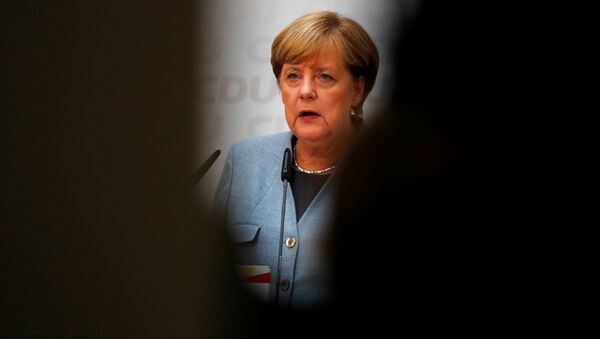 John Wight
All materials
Angela Merkel's victory in the German elections has been widely perceived as a defeat due to the gains of the nation's right-wing Alternative for Deutschland (AfD), which enters the Bundestag as the third largest party on 13 percent of the vote behind Merkel's Christian conservative CDU, and Germany's mainstream left opposition SPD.

Up to this point, Germany was a country and society in which the historical memory of Hitler and the Nazis in the 1930s and 1940s had ensured that any politics even the slightest bit suggestive of the re-emergence of the hard right could never gain serious traction. That such a politics now has under Merkel's watch marks a low point in her political career, constituting a stain on her legacy as she embarks on her fourth term as Chancellor.

Merkel's Position Shaky, While AfD Rise 'Is Return to European Norms'
It is hard to imagine that if not before she now has no cause to regret her decision to open Germany's borders in the face of the refugee crisis that exploded across the Mediterranean into southern Europe in 2015. Millions of men, women, and children arrived in all manner of boats, making the perilous and in far too many cases fatal journey across the Mediterranean from North Africa, desperate to escape the chaos and mayhem engulfing Syria, Iraq, Afghanistan, Libya, and Somalia courtesy of Western foreign policy.

Merkel, in what her supporters in Germany and admirers outwith the country considered to have been an outstanding act of humanitarianism, decided to open Germany's borders in early September 2015 in the face of opposition within Germany and across the EU; especially within transit countries such as Hungary, whose Prime Minister Viktor Orban soon earned himself a deserved reputation for severity in the treatment of refugees and asylum seekers. The result of the German Chancellor's open-door policy was the influx of over a million asylum seekers into Germany by the end of 2015. 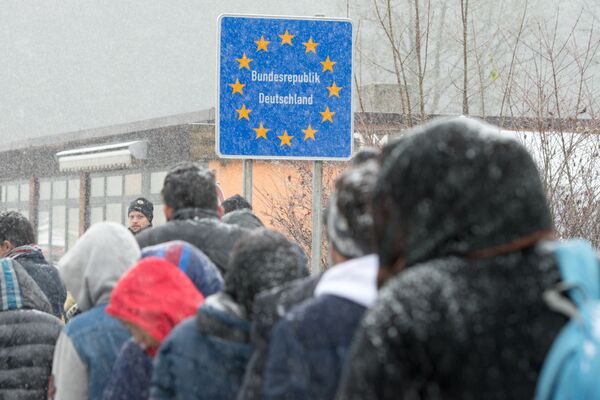 Amid the current anti-migrant and anti-refugee climate which predominates in Europe — much of it rooted in legitimate concerns over security and understandable fears surrounding terrorism, but much of it rooted in racism and xenophobia — the German Chancellor's decision to allow such large numbers into Germany in such a short space of time was, in hindsight, politically disastrous.

In a February 2016 article carried in Der Spiegel, we learn that "Conditions for refugees [in Germany] are already rapidly deteriorating. Social benefits are being reduced, limits are being placed on family reunification in a way that will lead even more women and children to make the dangerous journey by boat to Europe. The number of countries designated as safe will be increased, allowing for the easier rejection and deportation of asylum applicants. And there will be a forced repatriation of Afghan nationals — to the very country that Western troops were unable to pacify and is now sinking into civil war."

What Merkel and her supporters have just learned, after shedding one million votes to to other parties, including most significantly the AfD, is that Germany is no longer immune from the resurgence of nationalism and the racial, religious, and ethnocentric politics that have been sweeping across Europe and the West in recent years. 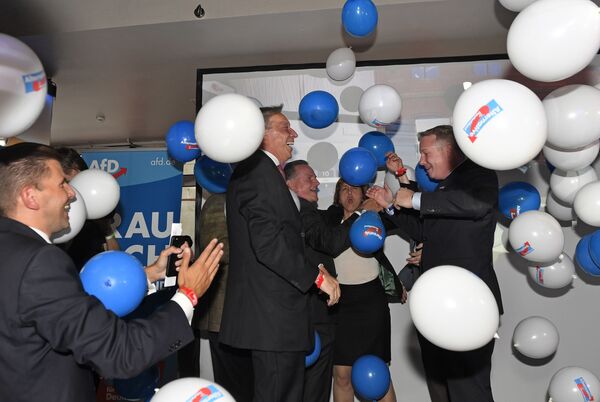 AfD board members celebrate with balloons during the election party of the nationalist 'Alternative for Germany', AfD, in Berlin, Germany, Sunday, Sept. 24, 2017, after the polling stations for the German parliament elections had been closed.
© AP Photo / Martin Meissner

The AfD, which among its campaign pledges included a vow to stop what they described as an "invasion of foreigners," is a party that would appear to have made peace with Germany's Nazi past, even though its officials and supporters deny any association with Nazi ideology. Its success is astounding considering the party was only established in 2013 — initially to protest the bailout of indebted EU countries such as Greece before morphing into an anti immigration party, filling the space in German politics opened up by the backlash to Merkel's open door policy of 2015.

In may respects the AfD resembles UKIP in the UK and Marine Le Pen's National Front in France, saddled with the label of neo-fascist and racist by their detractors, while themselves claiming to stand for traditional values and strong borders in order to prevent their respective countries being "overrun" with migrants and refugees. The main locus of their ire is Islam and Muslims; this in the context of events in the Middle East and concomitant rising tide of terrorist attacks across Europe in recent years, including Germany, that have been carried out in the cause of Salafi-jihadism.

With Germany home to the largest Muslim population in Europe, at 4.8 million, and with the growing traction of the extreme interpretation of Islam, Wahhabism, not only within Muslim countries in the Arab and Muslim world but also Muslim communities in countries like Germany, the ingredients for the growth in support of anti-Muslim political formations such as the AfD have been in place for some time.

Islamist Recruitment in German Prisons: How to Identify Radicalization
In December 2015, Germany's SPD Vice Chancellor, Sigmar Gabriel (now Minister of Foreign Affairs), gave an interview to a leading German newspaper in which he railed against Saudi influence around the world and within Germany's Muslim community: "Wahhabi mosques are financed all over the world by Saudi Arabia," he said, before continuing, "In Germany, many dangerous Islamists come from these communities." The German minister's words of warning of Saudi influence, unprecedented for a major European politician, tied in with a German intelligence report claiming that there were 7,900 Salafists living in Germany.

Returning to the 2017 German election results and though, as with the support enjoyed by UKIP in Britain, culminating in Brexit, and Marine Le Pen's National Front in France, which enjoyed historic gains in the French elections earlier this year, many will attribute the AfD result to a protest vote against the mainstream parties, complacency when it comes to the emergence and growing traction of the ideologically-driven right would be folly.

After all, if European history teaches us anything it is that where fascism is concerned, "A cloud no bigger than a man's hand can be the harbinger of great storms to come."