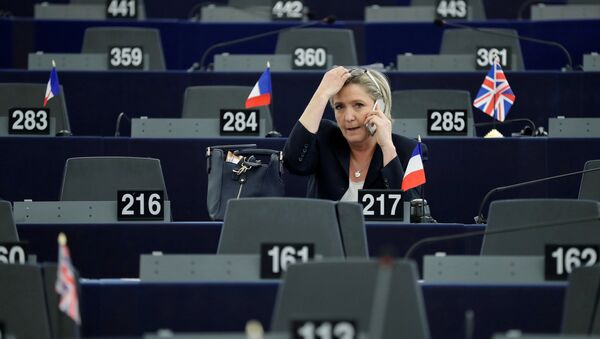 On Thursday, the closest aide to French National Front (FN) leader Marine Le Pen and the party's vice-president, Florian Philippot, announced that he was leaving the party. He was followed by his allies, including another Le Pen adviser, economist Philippe Murer, who explained the reasons behind the split to Sputnik France.

Florian Philippot, Marine Le Pen's right-hand man and for years her closest aide and informal leader of the sovereigntists, who prioritize economic issues, fight the EU and for an exit from the Eurozone over immigration issues and the protection of traditional values, has quit the party over disagreements with its leader.

Sophie Montel, one of Philippot’s closest aides and an FN member for over 30 years, said on Twitter she was also quitting the party. So did Philippe Murer, another Le Pen adviser and economist.

​Philippe Murer explained to Sputnik France the reasons for his decision.

"I can't remain a member of Marine Le Pen's party because its political line is changing considerably," he told Sputnik.

He further elaborated that Le Pen had chosen to refocus on core policies concerning immigration and French national identity, while perhaps softening her anti-euro tone, which many say contributed to her defeat in the presidential election run-off.

Cuckooed! How an Undercover MI5 Operative Helped Take Down the National Front
"After the presidential campaign, [Gilbert] Collard said that the elections were a referendum against the euro. [Louis] Aliot, [Nicolas] Bay, and [Robert] Ménard are criticizing the sovereignty from euro, pretending that we have not been elected because of it. Through the mass media, Collard and Ménard have demanded the resignation of Philippot and Marine Le Pen has supported them," Philippe Murer told Sputnik.

"In my view, our party cares less about sovereignty and more about identity. France's sovereignty has been put into cold storage," he concluded.

The politician further explained that the new political line of the party will focus more on the immigration, which is a very important issue, but not the only one which his home country is currently facing.

"There are 60,000 activists in the party and 11 million constituents. These people will be left out in the cold," he said.

"The FN pursues an inconsistent, outdated program; that is why I am quitting the party.  I can't remain a member of a party which does not meet my political interests. Ethics is the most important element of politics. I would have been forced to lie to the French people that I support the new party strategy, which, in fact, I do not," he told Sputnik.

French National Front Party May Review Anti-Euro Stance After Elections' Results
Philippe Murer however did not rule out that he would return into politics if some program draws his attention.

Meanwhile, responding to Philippot's move, Le Pen told LCP televsion that "the National Front will rebuild itself without difficulty."

"National sovereignty is the mainstay of our struggle," she added. "We will continue to fight the European Union with all our soul because it is an instrument for the elimination and impoverishment of our people."