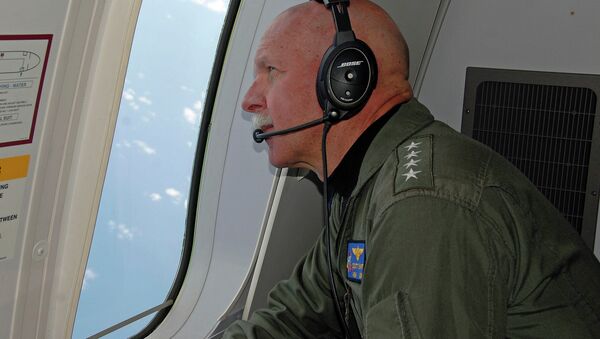 © Flickr / U.S. Pacific Fleet
Subscribe
US Pacific Fleet commander Admiral Scott Swift has requested retirement after the Pentagon refused to appoint him as head of US forces in Pacific.

"I have been informed by the chief of Naval Operations that I will not be his nominee to replace Adm. [Harry] Harris as the commander, US Pacific Command," Admiral Swift said in his statement.

"In keeping with tradition and in loyalty to the Navy, I have submitted my request to retire. I do so with great appreciation and gratitude for the honor of having served so many sailors and their families for what will be 40 years in January," he added.

Swift has not specified a desired retirement date, saying he will continue his service as long as his command desires.

"There is much work to be done here in the Pacific area of responsibility," he said. "Whether my timeline of remaining service is six weeks or six months, I will fill that time with the energy of an ensign and the wisdom drawn from the 140,000 sailors who report for duty every morning in the Pacific Fleet."

US Supercarrier Starts New Drills With Japanese Navy South of Korean Peninsula
Swift's retirement comes as investigations of two deadly naval ship collisions that took the lives of 17 sailors and did millions of dollars in damage are underway. Following the incidents, Swift personally traveled to Japan to relieve 7th Fleet Commander Vice Adm. Joseph Aucoin of service. Whether Swift's request is related to the accident investigations has not been revealed.

The Pentagon has not immediately satisfied Swift's request.

"Adm. Swift has been leading our Navy and inspiring sailors for nearly 40 years. Countless sailors and their families have benefitted from his inspired leadership," Chief of Naval Operations Adm. John  Richardson said in a Monday night statement to US Naval Institute News.

"The Navy is grateful to him and his family for their dedicated service. I look forward to continuing to serve together as he leads our fleet in the Pacific," he added.

The two other candidates to take Harris's position are US Fleet Forces commander Adm. Phil Davidson and the commander of US Pacific Air Forces, Gen. Terrence O'Shaughnessy, according to USNI News.

In July, Swift made headlines when he said he was ready to conduct a nuclear strike against China should US President and Commander-in-Chief Donald Trump issue such an order.

"Every member of the US military has sworn an oath to defend the Constitution of the United States against all enemies foreign and domestic and to obey the officers and the president of the United States as the commander in chief appointed over us," he said in an interview at Australian National University.