Hope for 'Fair Play': Russian Anti-Doping Agency on the Way to Reinstatement 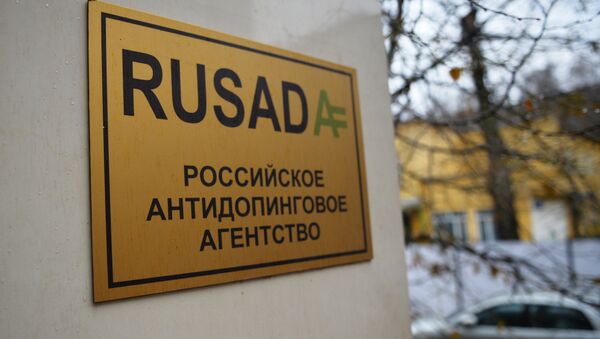 WADA has specified the crucial criteria for the reinstatement of the Russian National Anti-Doping Agency. Merely three critical elements remain on the way to completely restore RUSADA's authority.

On Sunday, WADA held an Executive Committee Meeting in Paris to discuss, among other issues, the status of RUSADA and its "roadmap for compliance."

"WADA Management emphasized that, in particular, the following three critical elements remain: That the responsible authorities for anti-doping in Russia must publically accept the reported outcomes of the McLaren Investigation. That the Russian Government must provide access for appropriate entities to the stored urine samples in the Moscow Laboratory. These samples are sealed off due to a Federal investigation. That WADA audits RUSADA; which, will be carried out the week of 25 September 2017," the press release read.

WADA Chief Criticizes iNADO for Ignoring Russia's Anti-Doping Efforts
According to the statement, the Compliance Review Committee (CRC) will hold a special meeting on October 24 to hear the updates from WADA’s audit team and WADA Independent Experts in Russia. After that the CRC will issue a recommendation to the November 2017 Board on approval or disapproval of RUSADA's reinstatement.

In 2015, WADA accused Russia of multiple anti-doping violations and suspended the Moscow laboratory of RUSADA.

A year later, Richard McLaren, the head of WADA commission, presented a two-part report on doping violations in Russia, which alleged the existence of a state-supported doping system. Following the publication of the report, WADA urged the International Olympic Committee (IOC) to consider a blanket ban on the entire Russian Olympic team, but instead the committee let individual sports federations act on the issue, allowing a number of Russian athletes to participate in the Rio Olympics in 2016. At the same time, the International Paralympic Committee (IPC) banned all Russian Paralympic athletes from the 2016 Summer Paralympics and the 2018 Winter Games.

Russian President Vladimir Putin and Sports Minister Pavel Kolobkov denied the existence of state interference, while admitting that Russian sports did have some doping-related issues.

In early August, WADA published a roadmap to code compliance, with 12 criteria, including public acceptance of the McLaren report, that Russia had to meet before WADA's independent Compliance Review Committee can recommend that RUSADA be reinstated.