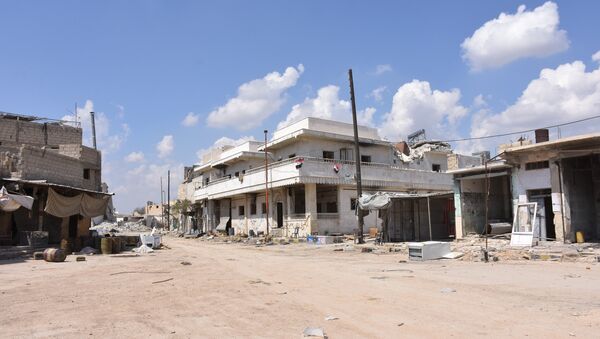 The Russian Center for Syrian reconciliation reported the successful delivery of over two metric of humanitarian aid and the opening of a makeshift hospital in a settlement in Syria's Aleppo province.

ALEPPO (Sputnik) — The Russian Center for Syrian reconciliation delivered on Monday over two metric tons of humanitarian aid and opened a makeshift hospital in a settlement in Syria's Aleppo Governorate, a representative of the center said.

"There are many poor settlements, we are visiting with local authorities and choosing a settlement in advance. We see how the people live, who have recently returned home. And then bring humanitarian aid there. Today we have delivered over two tons," Soslan Tseboyev told reporters.

The representative noted that four tons of engineering materials will be delivered to Syria from Russia to restore war-torn regions of the country.

Syria has been in a state of civil war for six years, with government forces fighting a wide array of militant groups who strive to overthrow President Bashar Assad. Many of the groups openly advocate the replacement of the government with an extremist Islamic theocracy and receive funding and weaponry from their coreligionists abroad; the most powerful of these groups, Tahrir al-Sham (formerly Al Nusra) and Daesh (ISIS), have been condemned by the international community as terrorist organizations.

The city of Aleppo, which saw years of intense urban warfare as government forces struggled against opposition factions and terrorist groups, was completely liberated by Syrian troops in December 2016. Elsewhere in Aleppo province, people have already started to return to their homes. More than 1,500 citizens have recently returned to their homes in the town of Maskanah, located in the eastern part of the province, according to reports by the Russian Defense Ministry.