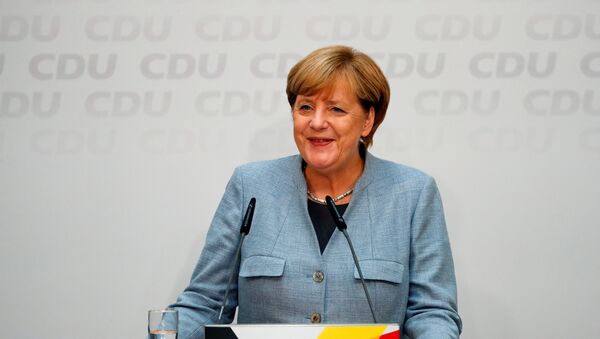 Incumbent German Chancellor Angela Merkel has won a fourth term as leader of the country. Her center-right CDU/CSU won 33 percent of the popular vote in Sunday's federal election. Merkel now faces the task of forming a coalition in the 709-seated Bundestag.

Merkel expressed a believe that right-wing Alternative for Germany (AfD) party, which has won seats in the parliament for the first time, would not influence the German policy toward Europe.

"I believe that parties that may form a coalition are able to make a decision themselves, despite all the contradictions… This will be reflected in future coalition agreements, but the Alternative for Germany will not have any influence on it," Merkel told reporters.

Merkel said she would "look for a dialogue with the CSU, there is no doubt that we will act together."

The German chancellor added that a new leader of the CDU/CSU parliamentary group would be chosen on Tuesday and that she had proposed Volker Kauder for this post.

Despite certain differences, mostly in social issues, the two parties are considered as allies in German politics, and have been cooperating for decades with a short-time separation in the 1970s. Kauder has been the chairman of the CDU/CSU parliamentary group since 2005, when he replaced Merkel at this post.

"There is polarization, which is connected with me as a person, it's obvious. But despite this, as I said in the last weeks of the election campaign, the decision that was made [about participating in the campaign]… was correct," Merkel said.

“I believe that this [the 2015 migration crisis] will not repeat in the same form,” Merkel told a press conference, adding that “many measures were taken for this.”