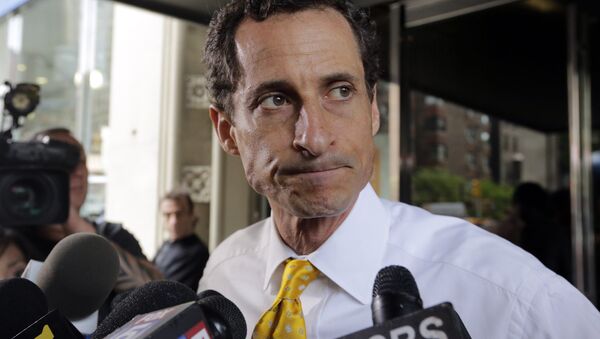 Former US Congressman Anthony Weiner has been sentenced to 21 months in prison for sending explicit messages to a teenage girl, Acting US Attorney Joon Kim announced in Manhattan federal court on Monday.

"Justice demands that this type of conduct be prosecuted and punished with time in prison," Kim said. "Today, Anthony Weiner received a just sentence that was appropriate for his crime."

In May, Weiner pleaded guilty to one count of transferring obscene material to a minor.

Weiner initially faced up to ten years in prison for his two-month sexting session with a 15-year-old girl from North Carolina, but on Monday the sentence was set for 21 months, according to the press release from Justice Department.
In addition to prison term, Weiner was sentenced to 3 years of supervised release.

FBI Obtains Warrant to Search Top Clinton Aide Abedin’s Emails
Weiner, 53, is husband of Huma Abedin, who was a campaign vice president for 2016 Democratic presidential candidate Hillary Clinton. Wiener and Abedin are now in the process of disolving their marriage.

During the election campaign, US federal investigators examining Weiner’s laptop he shared with Abedin discovered emails pertaining to a separate investigation into Clinton’s use of a private email server during her tenure as secretary of state.

The discovery prompted then-Federal Bureau of Investigation (FBI) Director James Comey to announce he was reopening the FBI’s Clinton probe less than two weeks before the November 8 election.