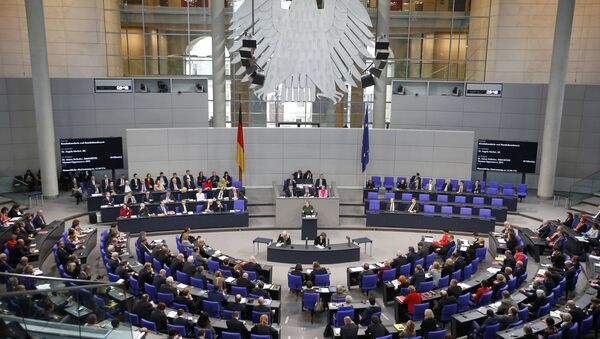 The number of seats in the Bundestag, Germany's federal parliament, will rise to 708.

BERLIN (Sputnik) — The 19th Bundestag will be composed of 709 seats. However, the coalition between German Chancellor Angela Merkel's alliance, which unites the Christian Democratic Union and the Christian Social Union (CDU/CSU), and the Social Democratic party (SPD), have seen their parliamentary presence slip, the Federal Returning Officer said Monday.

German Election Witnessing High Voter Turnout – Local Election Committees
In comparison with the previous composition of the Bundestag, the new one will be increased by 78 seats due to the enhanced position of minor parties. The CDU/CSU is receiving 246 seats (instead of 311) and the SPD will get 153 (instead of 193). The euro-skeptic anti-immigration party Alternative for Germany (AfD) party will have 94 seats, the Free Democratic Party (FDP) has 80 seats, The Left Party has increased its presence to 69 seats (from 64) and the Green Party will have 67 (instead of 63). Therefore, CDU/CSU got 43 additional seats, SPD – 22, AfD – 11, FDP – 15, while The Left and the Greens – 10 each.

Germany held a general election on Sunday, after which a new government is supposed to be formed and a chancellor elected.

The formal final result of the election is set to be officially announced at the inaugural meeting of a new Bundestag on October 12.