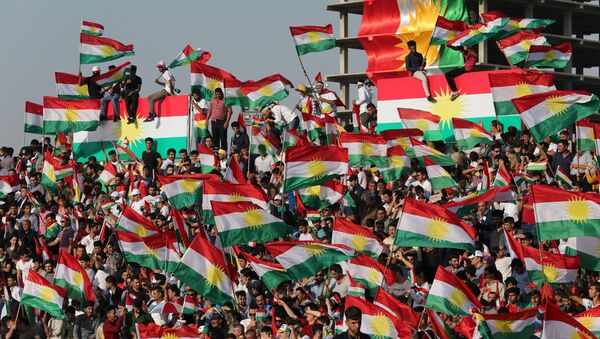 © REUTERS / Ahmed Jadallah
Subscribe
On August 25 voters cast their ballots in an independence referendum in Iraqi Kurdistan which was held despite the protest of Baghdad and some other foreign governments. Here is what you need to know about the region which so desperately seeks secession.

MOSCOW (Sputnik) – Iraqi Kurdistan is a northeastern Iraqi region mainly populated by Kurds, which held a referendum on independence on Monday.

The ethno-geographic region of Kurdistan is located in the central part of the Middle East, including parts of Turkey, Syria, Iran and Iraq. The demarcation of the region's precise boundaries remains a complicated issue.

Iraqi Kurdistan is located in the center of ethnic Kurdistan and is the most developed Kurdish region. On March 11, 1974, Iraq passed a law on the proclamation of the Kurdish Autonomous Region.

Iraqi Kurds Hope to Cooperate With Turkey Despite Threats - Official
On October 15, 2005, the permanent constitution of Iraq was approved at a nationwide referendum. It formalized the Iraqi state’s federal system, the status of Iraqi Kurdistan as one of the federation’s regions as well as the rights of the Kurds and other ethnic groups. Article 7 of Iraq's constitution recognized the Kurdish language as one of the country’s official languages along with Arabic.

The administrative boundaries of Iraqi Kurdistan are located in four provinces: the provinces of Erbil, Dohuk, Sulaymaniyah and Halabja.

Iraqi Kurdistan borders on Syria in the west, Iran in the east and Turkey in the north. The 40,600-square-kilometer (over 15,600 square miles) region’s capital is the city of Erbil. Some 5.2 million people lived in the region in 2009.

Iraq: Residents of Disputed Kirkuk Voting on Kurdish Independence Amid Tensions
The main ethnic groups include the Kurds, the Assyrians, the Turkmens, the Arabs, the Armenians, the Yezidi, the Shabak and the Mandei.

Iraqi Kurdistan has all the required state symbols, including its own flag, anthem, constitution, a regional code of laws, a parliament, a president, a government, judicial and tax systems, law enforcement, border control and customs agencies as well as the regional military forces called the Peshmerga Brigades. The regional government successfully implements the multi-vector foreign policy and foreign trade activities.

Oil and gas production is the main and most promising industry in Iraqi Kurdistan, whose oil reserves are estimated at 45 billion barrels.

Local oil accounts for 60 percent of all currently produced Iraqi oil. In 2003, Iraqi Kurdistan announced its right to independently export oil from its territory. In 2004, Erbil and Baghdad signed an agreement on sharing oil sale profits, with Iraqi Kurdistan receiving 17 percent of these profits. Currently, over 45 companies from over 30 countries operate in Iraqi Kurdistan.

Iraqi Kurdistan's Independence Vote: Peshmerga in a 'State of Combat Readiness'
The region’s natural gas reserves are estimated at 5.67 trillion cubic meters or about 3 percent of the world’s gas deposits.

In December 2013, Iraqi Kurdistan and Turkey signed an agreement on exporting regional oil and gas. Under the deal, Turkey can purchase 50 percent of Kurdistan's export. The first deliveries under the agreement were made in 2014.

The region has enough water resources and is therefore suitable for agriculture.

In 2014, foreign investment in the Iraqi Kurdistan economy was estimated at $5.5 billion, with the United Arab Emirates being the main investor.

The region is considered one of the safest in Iraq, where Daesh terrorist group seized large areas in 2014, when the country was ruled by the then Prime Minister Nouri Maliki.

The Peshmerga paramilitary units are making a substantial contribution to the war against Daesh in Iraq. Between June 2014 and March 2017, about 1,600 Peshmerga soldiers were killed and about 10,000 others were injured while fighting the terrorists.

000000
Popular comments
interesting summary, but there is probably a little more that we need to know.
michael
26 September 2017, 02:32 GMT
000000
the problem with the kurds is that they want to claim all resourses when in reality it belongs to all regional countries, in syria oil and gas deposits belong to all Syrians not just the kurds in iraq oil and gas deposits belongs to all Iraqis not just the kurds while allowing usa and European oil companies to only make deals with the kurds and excluding their country man is completely wrong. this usa and eurpean countries are dividing them in order to get in on the oil exploration fields.