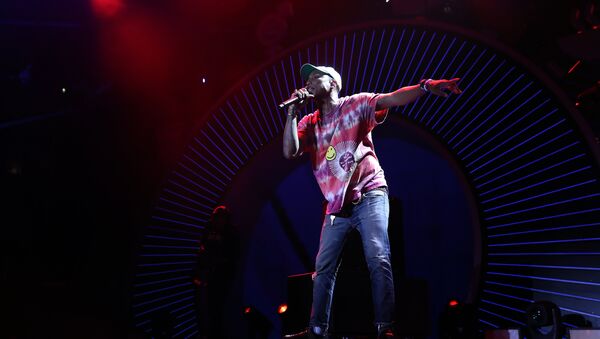 Virginia native Pharrell Williams got down on two knees to salute the American flag as he performed at a charity concert in Charlottesville, echoing a gesture by NFL players who have started kneeling during the national anthem in an effort to draw attention to racial injustice.

At a charity concert held in Charlottesville, Virginia, musician Pharrell Williams got down on both knees in an emotional tribute to the victims of violent clashes between the far-right and counter-protestors in the town last month.

​Backed by The Roots, he then launched into a rendition of his hit song "Happy."

Williams' gesture echoed that of US athletes including NFL quarterback Colin Kaepernick, who kneels during the national anthem at football games in an effort to draw attention to racial injustice.

US President Donald Trump has accused the athletes of "disrespecting" the American flag by refusing to stand when the anthem is played.

​During the Charlottesville concert, singer Dave Matthews introduced Susan Bro, the mother of 32-year-old Heather Heyer, an anti-fascism activist who was killed during a protest against a gathering of far-right sympathizers in Charlottesville last month.

During the Charlottesville concert, singer Dave Matthews introduced Susan Bro, the mother of Heather Heyer, a 32-year-old paralegal who was killed in Charlottesville last month. Heyer had joined counter-protesters from organizations such as Black Lives Matter and was run down in a car during a protest against 'Unite the Right', a gathering of alt-right opponents to the destruction of statues commemorating Confederate Civil War figureheads.

"I'm here in her place to sing with all of you in her place," Bro told the crow, asking them to "turn our righteous anger into action and understanding."

"By raising our voices against hatred, you make Heather's death count … and her brief life mean even more," she said. "Sing your hearts out!"

Other performers at the concert included Justin Timberlake, Ariana Grande and Chris Stapleton, as well as surprise guest appearances by Chris Martin and Stevie Wonder.