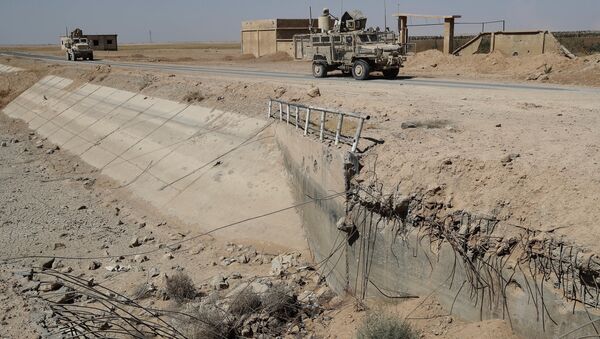 © AP Photo / Hussein Malla
Subscribe
International
India
Africa
The photographs that the Russian Defense Ministry published on Sunday on its Facebook page provide compelling evidence that the Syrian Democratic Forces (SDF) and the US troops that support them are present in Syria's areas held by the violent extremist group Daesh, the ministry said Monday.

Russian Defense Ministry's spokesman Mj. Gen. Igor Konashenkov said Monday that Moscow received no response from the United States or the SDF on the issue of the photographs' revelation by Russia.

"No explanations or refutations on the issue from the representatives of the SDF or the US Armed Forces followed," he stressed.

The photos in question show US Hummer armored vehicles that are used by the US Army's special forces in the Deir ez-Zor area. The Defense Ministry said the footage clearly showed that the units of US Army's special forces were deployed in the footholds previously set up by Daesh militants. Speaking on Monday, Konashenkov stressed that the pictures indicated that Daesh terrorists didn't fight against US personnel in the area, citing the absence of shell craters and the signs of airstrikes in the area.

The spokesman also denied the claims that Russia has attacked SDF's positions near gas fields in Deir ez-Zor. The SDF said earlier in the day that Russia’s and Syria’s had killed and injured some of the group's members.

"During the operation to destroy the last Daesh foothold in Deir ez-Zor, the Russian Aerospace Forces carry out precision airstrikes on terrorist objects confirmed via multiple sources," Konashenkov said.

The developments come amid fierce fights in the area of Deir ez-Zor. The city had been under Daesh blockade for over three years until in early September, the Syrian government troops, backed by Russian airstrikes, broke the siege to the west and south of the city.