For Dummies? US Publishes How-To Handbook for Countering 'Russian Threat' 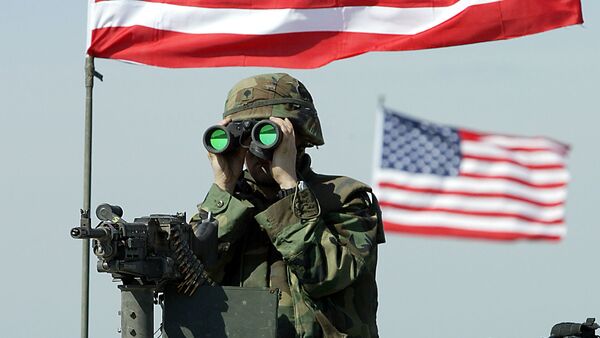 The Russian New Generation Warfare Handbook has recently emerged on the Internet; the US magazine National Interest described it as something that explains how the US Army should "defeat Russia's hybrid-warfare strategy."

The authors of the handbook, published by the website publicintelligence.com earlier in September, said that it will be mainly centered on the so-called "Russian threat."

The 68-page publication contains photographs and data on Russian equipment that could be used to conduct an asymmetric warfare and that could be involved in "Russian operations in Ukraine and Crimea," according to the National Interest's Michael Peck.

The Russian newspaper Izvestia, in turn, reported that "the handbook in fact repeats all the common clichés of American propaganda, specifically focusing on the 'hybrid war' that the Russian army is allegedly waging."

Poland Uses Imaginary 'Russian Threat' to Obtain Secret US Military Technology
The US military's interest was piqued by the 2014 military operation in Crimea, in which a number of "small special-operations troops" from Russia ostensibly took part.

Peck, for his part, said that the handbook concludes that the Russian strategy is based on achieving regime change by uniting with local forces rather than on Russian troops achieving a conventional military victory.

He quoted the handbook's authors as claiming that Russia allegedly used "the US approach, covering the battlefield with manned and unmanned sensor systems to detect enemy forces, which can then be destroyed by airpower and artillery."

The authors also mentioned several "weaknesses" of the Russian Armed Forces which the US military could benefit from, according to Peck.

These ostensibly include lack of motivation among conscripted servicemen, weak logistics and the allegation that "air and artillery support tends to be rigid and reliant on volume rather than precision."

In addition, the authors urged US forces to drill countering Russian electronic warfare systems, which they said "jam GPS and radios."

In February 2015, the warring parties to the conflict signed the Minsk peace agreements, brokered by the Normandy Four states (Russia, France, Germany and Ukraine), in order to reach a ceasefire.

The truce, however, has been repeatedly breached, with Kiev forces and Donbas militia accusing each other of violating it.

The US and Kiev have repeatedly blamed Russia for being involved  in the Ukraine conflict, with Moscow rejecting the allegations.