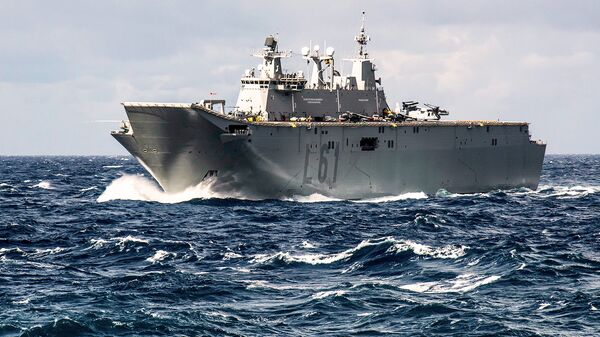 When it comes to news about aircraft carriers, the US Navy has a virtual monopoly. Its fleet of Nimitz- and Gerald R. Ford-class supercarriers outclasses pretty much anything other naval powers, including near-competitors Russia and China, have to throw at them in terms of numbers, pure tonnage, and power projection capabilities.

Thailand's HTMS Chakri Naruebet (literally translated as 'In Honor of the Chakri Dynasty'), the flagship of the Royal Thai Navy, is among the smallest modern aircraft carriers in the world today. Displacing only 11,500 tons (against 61,000 tons for the Admiral Kuznetsov and 100,000 by the USS Gerald Ford), the ship's 182 meter length corresponds more to that of a cruiser than a carrier. 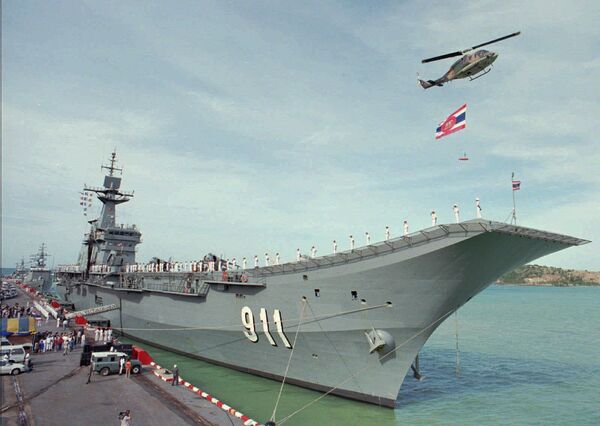 Launched in 1996, the HTMS Chakri Naruebet has been used to patrol the waters around Thailand's coastline and its exclusive economic zone, as well as for search and rescue operations. In recent years, the ship and its complement of SH-60 Seahawk helicopters has rarely left its base in the deep-water port of Chak Samet.

Kotz recalled that "until the early 2000s, the backbone of the HTMS Chakri Naruebet's air wing was the first iteration of the British AV-8A Harrier ground attack plane. However, their service life had already expired by that time. Factually, the Thai carrier today is really a helicopter carrier, and also the world's largest royal yacht, featuring spacious apartments for the monarch and his family, who are usually present onboard during the ship's rare outings at sea."

Gods of War: Top Five Most Fearsome Artillery Systems Used by the Russian Army
Thai media and experts have described the $336 million vessel as less of an aircraft carrier than an oversized royal yacht, and the ship has been nicknamed the 'Thai-tanic'.

The NAe Sao Paulo, the sole carrier in the Brazilian Navy, originally belonged to the French Navy, launched in 1960 under the name Foch. After serving France for nearly 40 years, the ship was sold to Brazil in 2000 for the bargain basement price of $30 million. However, in spite of continued French modernization efforts up to that point, the ship had become hopelessly outdated as it entered the new millennium.

Accordingly, Kotz wrote, many military experts saw Brazil's decision to purchase the vessel as more of a case of wanting to show off than based on any real military requirements. 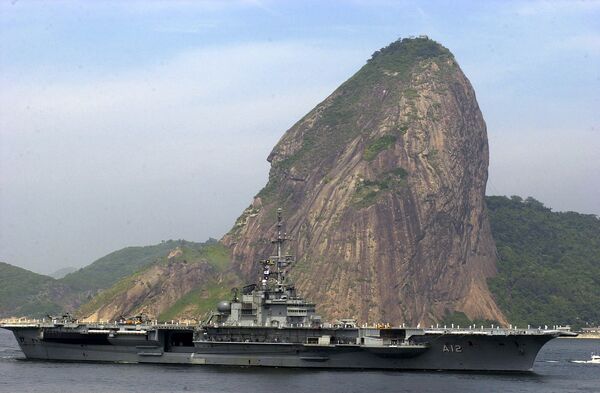 The backbone of the Sao Paulo's air wing consists of 14 A-4 Skyhawk attack aircraft, along with anti-submarine warfare and transport helicopters. Unfortunately, the journalist noted, the Brazilian Navy would never get a real chance to show off the ship on the world's oceans:

"Over the course of nearly its entire period of service with the Brazilian Navy, the Sao Paulo was constantly being modernized. The ship was supposed to enter the fleet in 2013 following another breakdown, but a few months before that a serious fire occurred onboard. As a result, on February 14, 2017, it was announced that the ship would be retired, with further restoration work considered economically impractical."

The 265 meter, 32,800 ton Clemenceau-class carrier, capable of carrying 22 planes and 17 helicopters, will be decommissioned in 2018, with no similar-class vessel found to replace it.

The Charles de Gaulle, the flagship of the French Navy, has had a much happier history than its French-turned Brazilian cousin. Launched in 1994, the 42,000 ton full load vessel made history as France's first nuclear-powered surface ship, and as the only other nuclear-powered aircraft carrier design ever completed outside the US Navy (the Soviet Navy had plans to build the Ulyanovsk, a massive Soviet nuclear-powered carrier, but that ship was never completed due to budget cuts and the collapse of the USSR). 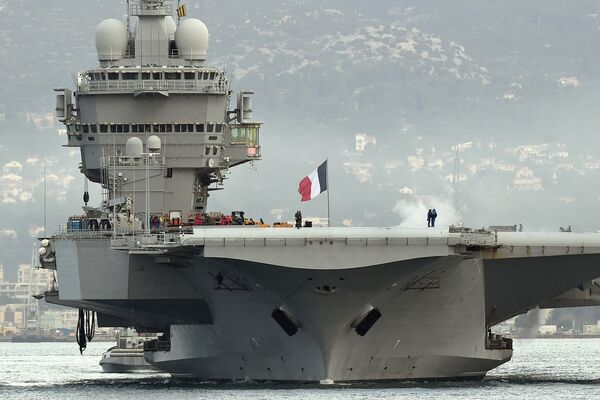 Secret CIA Docs Reveal What Worried US Intel Most About Soviet Navy Capabilities
The Charles de Gaulle was commissioned in 2001. In 2011, it played a role in the infamous NATO-led military operation in Libya to oust Muammar Gaddafi. Four years later, in response to the terrorist attacks in Paris in late 2015, the ship took part in airstrikes against Daesh in Syria. In the latter operation, Russian ships in the Mediterranean provided cover for the French warship from possible attack. In late 2016, the Charles de Gaulle was involved in anti-Daesh operations by the US-led coalition in Iraq.

The carrier is particularly well protected from threats from the air, Kotz wrote. "It's covered by Aster 15 SAM systems, Sadral missiles and Giat 20F 20mm cannons. In general, the Charles de Gaulle is considered one of the most combat-effective in its class."

The 28,000 ton, 244 meter-long Cavour, commissioned in June 2009, is among the newest ships in navies with aircraft-carrying capabilities.

According to Kotz, calling the ship a traditional 'floating airfield' wouldn't be correct, since its complement of aircraft includes only eight AV-8B Harrier II fighters. In the future, the ship is expected to be fitted with F-35s. "However, the Cavour can also carry 12 helicopters for various purposes, as well as amphibious forces: 415 marines, up to 100 wheeled vehicles or 24 main battle tanks, or 50 heavy armored combat vehicles." 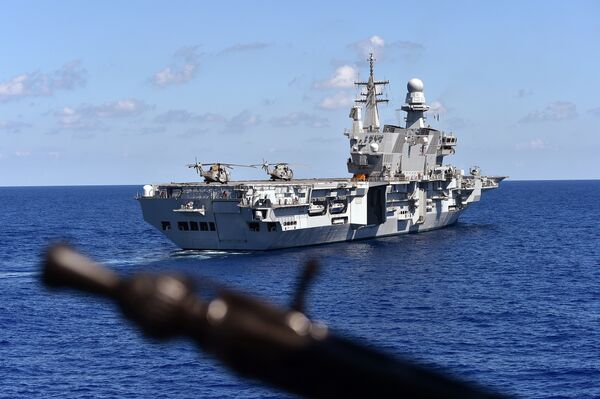 The Italian navy carrier Cavour is seen from German navy frigate ship Werra, as it sails in the Mediterranean Sea, close to the Libyan territorial waters on September 23, 2015
© AFP 2021 / ALBERTO PIZZOLI

In addition, the ship is capable of serving as a mobile command post for up to 145 officers and personnel. Effectively, Kotz recalled, the Cavour is really a universal combat system, "most suitable for expeditionary operations – transporting troops to the theater of operations, landing them on the shore and covering the landing with aviation."

In addition, the ship is armed with advanced sensor and electronic warfare systems, SAMs, anti-aircraft guns, decoy launchers, and close-in weapons. Still, Kotz recalled that "despite its rather formidable armament, the only major operation in which the Cavour has taken part is a humanitarian mission to help Haitians affected by the 2010 earthquake."

The Juan Carlos I, one of the most powerful ships in the Spanish Navy, is another ship that it would be impossible to describe as a 'pure' aircraft carrier, Kotz noted. The Navy itself classifies it as a multipurpose 'Strategic Power Projection Vessel'. 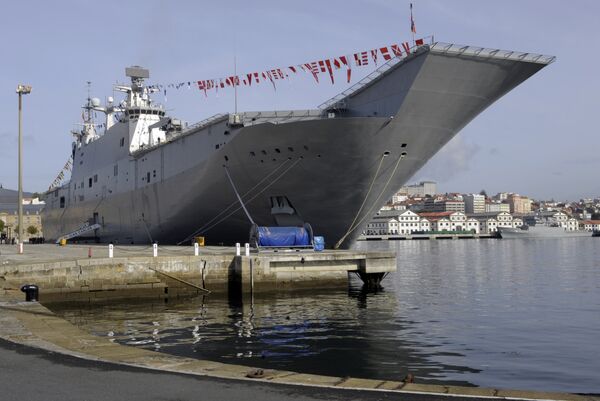 The Spanish Navy's strategic projection vessel Juan Carlos I is pictured during its giving ceremony at the Ferrol Naval Base, on September 30, 2010
© AFP 2021 / MIGUEL RIOPA

"In its concept, the vessel is close to ships of the US Wasp-class [amphibious assault] ships, but with an added ski jump for aircraft. The Juan Carlos I's main armament is its 25 AV-8 Harrier II fighter bombers. Additionally, it has four landing spots for heavy CH-47 Chinook choppers, and one for the V-22 Osprey convertiplane."

The 27,000 ton, 230.82 meter-long vessel can carry up to 1,200 marines, its hanger accommodating up to 46 Leopard 2E tanks, four landing barges and four inflatable landing craft. The ship has no combat experience, and so far has only taken part in NATO naval exercises.