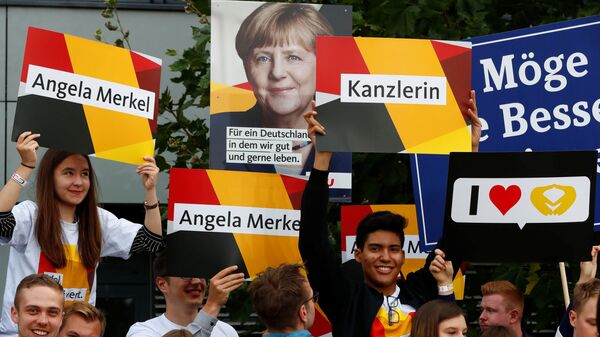 Germany's Christian Democratic Union party along with its Bavarian sister party, the Christian Social Union, both led by Chancellor Angela Merkel, are leading in German federal elections with 32.5 percent, according to a poll by the state broadcaster ZDF, while Martin Schulz's Social Democrats are in second place with 20 percent of votes.

According to the broadcaster, six parties entered the Bundestag, including Free Democratic Germany (FDP) with 10 percent, the Green and the Left parties with 9 percent respectively, and the right-wing Alternative for Germany (AfD) with 13 percent.

The ARD broadcaster's exit polls showed that CDU/CSU are gaining 32.5 percent, while SPD is getting 21 percent votes so far.

The right-wing Alternative for Germany party is set to take third place with 13.5 percent of votes, getting seats in the Bundestag for the first time ever.

The Social Democratic Party of Germany has announced following the announcement of the initial results that it is not going to participate in a coalition and is set to become the opposition.Exit polls indicate that none of the German parties will get a majority to form a government, meaning a coalition needs to be gathered.