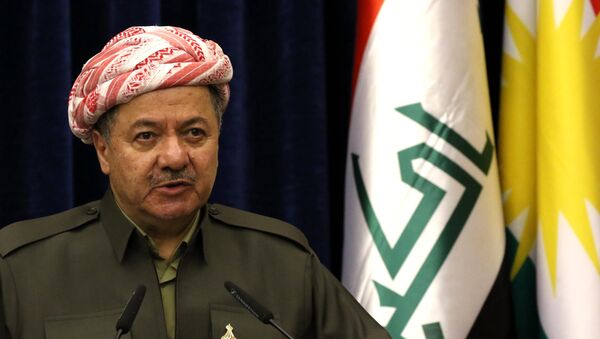 © AP Photo / SAFIN HAMED
Subscribe
Iraqi Kurdistan's President Masoud Barzani said on Sunday that Erbil is determined to hold a referendum on independence despite objections from Baghdad and other regional powers, stressing that Kurds are ready for the "long" talks to reach the peace in the region.

MOSCOW (Sputnik) — Iraqi Kurdistan has come to the conclusion that the autonomous region's security can be ensured only through gaining independence from Iraq, Masoud Barzani said at a press conference on Sunday.

Barzani noted that the anti-Kurdish atrocities committed during the rule of former Iraqi President Saddam Hussein as well as the violence of the Daesh terror group, outlawed in Russia, were rooted in the thousand-year-long culture of denial of the Kurdish existence in the area.

"That is why, we reached this conclusion that only through independence we can secure our future, that we are not going to have to pass the atrocities we had previously," the region's president said.

Why Iraqi Kurdistan Has Little Chance of Becoming Independent
Barzani stressed that Iraqi Kurdistan wants to establish "very good and excellent cooperation and relationship" with the neighboring countries, "even if they have negative perceptions." He said that Iraqi Kurds "do not think about a military conflict" with Baghdad, adding that Kurdish forces have coordination between Peshmerga Iraqi Kurdistan’s forces and the Iraqi army.

He also said Erbil will be ready for a long negotiation process with Baghdad on the issue of the borders of the Kurdish state following the vote.

On Friday, Barzani said that Iraqi Kurdistan would not postpone the referendum on the independence of the autonomy from Baghdad, despite the pressure, and will hold it on target date on September 25.