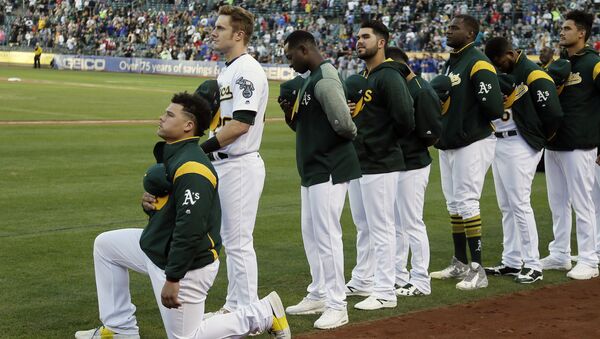 In an unprecedented move, the first professional baseball player has now “taken the knee” as the US national anthem plays prior to the game, simultaneously refuting divisive commentary by a sitting US president and supporting a widening peaceful protest movement in America.

As the fray between sports figures and the US president widens, Major League Baseball (MLB) member Bruce Maxwell has widened the protest by becoming the first baseball player to join in the peaceful protest movement shining a light on racism and other social and economic inequalities within the US.

Maxwell, born in Germany into a US military family and a longstanding supporter of American servicepeople, made his move after considering the potential career and political fallout "for a long time," according to the San Francisco Chronicle.

"My decision had been coming for a long time," the 26-year-old Oakland A's rookie catcher stated.

Maxwell, a black man who grew up with endemic US racism in Huntsville, Alabama — the precise location that US President Donald Trump on September 22 made his now infamous comments collectively referring to sports figures who protest peacefully as a "son-of-a-bitch," and urging fans to boycott the game — observed that he was widening the peaceful protests so as not to have only the members of one sport singled out.

"The only way we can come together is by informing…. To single out NFL players for doing this isn't something we should be doing — I felt it should be a little more broad," he said, cited by sfchronicle.com.

His California-based team quickly tweeted its support for Maxwell's move.

"The point of my kneeling was not to disrespect our military or our constitution or our country," Maxwell said, adding, "I'm kneeling for the people who don't have a voice."

Following Trump's Friday comments during an Alabama stump speech originally billed to be in support of the election of a Republican candidate, the US sports community has pointedly rallied around those players called out by the president.