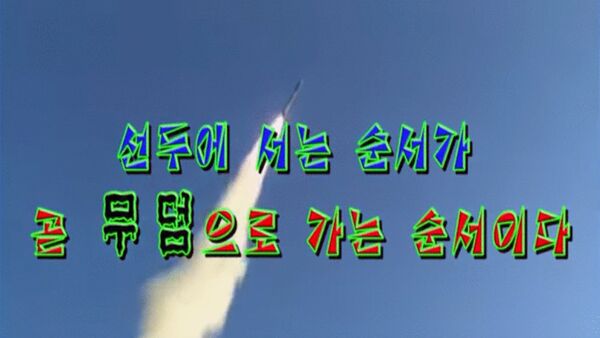 As the heated rhetoric between the leaders of Pyongyang and Washington continues to escalate, North Korea has added fuel to the fire by releasing doctored images showing US military assets in the process of being blown up by doctored explosions presumably caused by DPRK ordnance.

The cartoonish images, released by the People's Democratic Republic of China's (DPRK) state-run news media group DPRK Today on Sunday, show a US Air Force B-1B bomber aircraft and the US Navy aircraft carrier USS Carl Vinson, both with garish explosions overlaid on top of stock promotional photographs and video originally released by the Pentagon to tout their big weapons.

The 'fake news' video was posted to DPRK Today several hours after USAF B-1B Lancer nuclear-capable bombers flew in international waters near North Korea as a force gesture by Washington.

The photos included in the video also portray US President Donald Trump as "a mad man."

During the 90-second DPRK Today video, one of Pyongyang's Pukguksong-2 missiles is launched at a B-1B and a doctored image then shows the bomber jet aircraft overwhelmed in digital flames.

As the charmingly-crafted video plays out, a DPRK missile launched from what is assumed to be a North Korean submarine destroys the USS Carl Vinson, one of the US Navy's largest nuclear-powered aircraft carriers.

Text seen scrolling below the imagery throughout the video includes ponderous statements such as: "Should F-35, B-1B and the Carl Vinson lead the US attack, they will head to the grave in that order." The video also includes the obligatory flag-burning image.

The video follows in the wake of repeated "kindergarten' threats between DPRK leader Kim Jong-un, who has called Trump a "dotard" and "megalomaniac," and Trump, who has called Kim "rocket man" and a "loser."