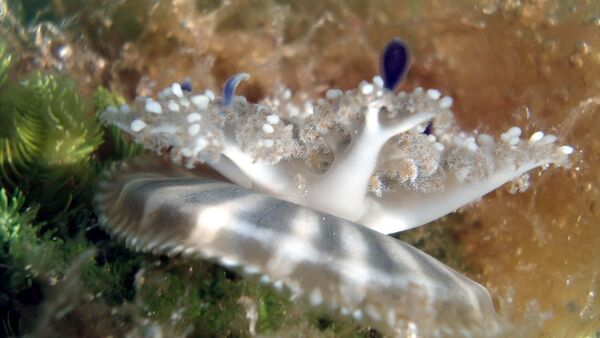 CC BY 3.0 / Chris Hind / Cassiopea
Subscribe
Sleep is so important that even organisms without brains need it, a study of primitive jellyfish slumbering on the ocean floor has concluded.

Scientists are a step closer to unraveling the biological mystery of sleep, after observing that one of the most evolutionarily ancient organisms sleeps at night, in a similar way to humans.

A study of the upside-down jellyfish Cassiopea, which is brainless, spineless and spends its entire life on the ocean floor, has found that it still needs to sleep despite this lack of physiological activity.

"It may not seem surprising that jellyfish sleep – after all, mammals sleep, and other invertebrates such as worms and fruit flies sleep," graduate student Ravi Nath said, co-first author of the paper published in the September 21 issue of Current Biology.

"But jellyfish are the most evolutionarily ancient animals known to sleep. This finding opens up many more questions: Is sleep the property of neurons? And perhaps a more far-fetched question: Do plants sleep?"

The jellyfish has neurons, but no central nervous system. As it sits on the ocean floor, its bell-shaped body pulses every second or so to get water to flow over its body, bringing food and washing away waste.

'Alien Faced' Fish Caught by Fisherman in Russia (VIDEO)
At nighttime, the scientists found, the jellyfish goes through periods where it pulses less often, only every 39 times per minute compared to about 58 times per minute during the day.

They also tested whether the animals suffered from sleep deprivation. They forced them to stay awake by spraying water at them, and then testing their activity the next day. The jellyfish were 17 percent less active after being deprived of slumber, the study found.

That such an ancient and simple organism sleeps shows that the need to sleep must have evolved early, before the emergence of a central nervous system, the scientists say.