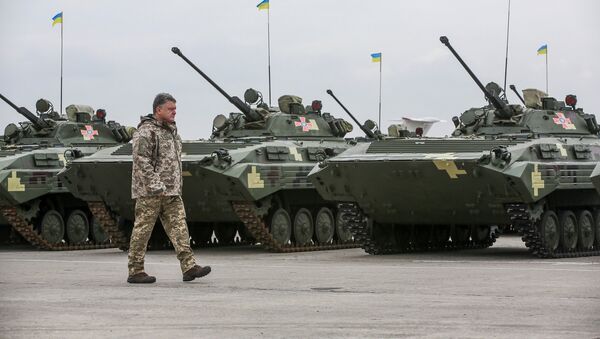 MOSCOW (Sputnik) — Moscow should counter Ottawa’s plans to allow deliveries of lethal weapons to Kiev as the respective decision on the issue may hamper the crisis settlement process in eastern Ukraine, the first deputy chairman of the Russian lower house's Defense Committee told Sputnik.

On Friday, the Globe and Mail newspaper reported that Canadian Prime Minister Justin Trudeau, after a meeting with Ukrainian President Petro Poroshenko, said he was moving forward on adding Ukraine to the list of countries allowed to receive supplies of lethal weapons.

"[Russia] has to strongly condemn these short-sighted statements and do everything possible to prevent it from happening," Andrey Krasov said.

The lawmaker noted that Trudeau's statement illustrated Canada’s inconsistent policy on Ukraine as the most important issue on the crisis settlement agenda was ensuring that the Ukrainian government fully implemented the Minsk agreements.

"Canada’s leadership should not be concerned about lethal weapons deliveries to Ukraine. It is more important to make Poroshenko implement Minsk agreements unconditionally and without any alternatives. Only when Ukraine itself fulfills the agreements, the violence will stop on the territories of Donbas republics and only then the parties will sit at the negotiating table," Krasov underlined.

Canada’s Trudeau Seeks to Unlock Lethal Arms Exports to Ukraine – Reports
Ukraine has repeatedly asked to be supplied with lethal and non-lethal weapons from the European Union and the United States. Russia strongly criticized the idea, stressing that it would only lead to an escalation of the situation in Donbas rather than the implementation of the Minsk agreements and ultimate resolution to the crisis.

Kremlin spokesman Dmitry Peskov said last month that all the states, especially those engaged in settling the Ukrainian conflicts, should avoid actions leading to further escalation of tensions.This standpoint has been backed by several European officials.

Kiev launched a military operation in the east of Ukraine in 2014, after local residents refused to recognize the new government that came to power then. The ceasefire agreement was reached in Minsk in 2015, brokered by the leaders of the Normandy Four group, namely France, Germany, Russia and Ukraine, but the situation has remained tense.