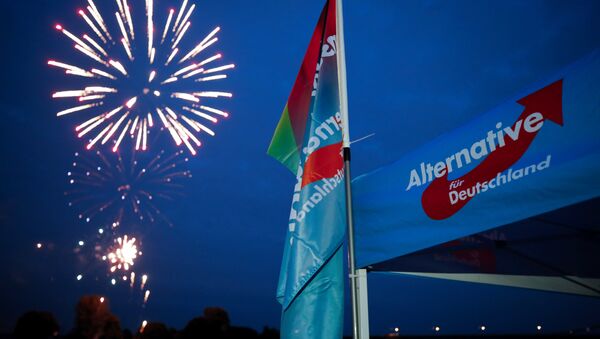 A senior official of the Alternative for Germany party told Sputnik that Germany should leave the European Union and improve its ties with Russia.

BERLIN (Sputnik) — The right-wing Alternative for Germany party (AfD) believes the country should leave the European Union and balance its ties with Russia, Andre Poggenburg, the AfD chairman in the federal state of Saxony-Anhalt, told Sputnik on Saturday.

The party’s program also states that Germany should leave the eurozone.

German AfD Party Confirms Plans to Probe Merkel's 2015 Decision to Open Borders
The AfD is projected to get some 10 percent in the Sunday’s parliamentary election and enter the Bundestag for the first time.

Germany's key parties have united to conspire against the right-wing Alternative for Germany (AfD), which is a sign of the lack of democracy in the country, Andre Poggenburg added.

"At least in Germany, the democracy begins to lose significantly as the old parties conspired [with each other to form] a cartel, which is opposed only by the AfD," Poggenburg said.

According to the politician, the right-wing AfD party was invited to only few electoral events, while the lead candidates from the conservative bloc of the Christian Democratic Union and Bavaria’s Christian Social Union (CDU/CSU) of incumbent German Chancellor Angela Merkel and the Social Democrats (SPD) took part in the TV debates.

"It is clear that the candidates or politicians from the AfD are invited in very reduced numbers. It indicates the lack of democracy in Germany," Poggenburg stated.

However, despite the pressure, AfD is not only expected to enter the parliament for the first time but also could receive 15 percent of votes across Germany and up to 20 percent in eastern regions in upcoming Sunday's election, Poggenburg noted.

The AfD continues to gain popularity across Germany because of its demands of strict immigration legislation, he stressed.

"We demand an immigration law. The left-wing policy of totally open borders with massive undocumented migration, which had been significantly fostered by the CDU until now, is legally and morally wrong. That is why, the AfD is popular," the politician stated.

Poggenburg added that, obviously, "the coalition of CDU and SPD will again form the government."

Germany will hold the parliamentary election on Sunday. Following the election, a new government will be formed and a new chancellor appointed. According to the latest polls, Merkel’s CDU/CSU is projected to come out on top with some 37 percent of the vote, followed by the SPD with some 22 percent.