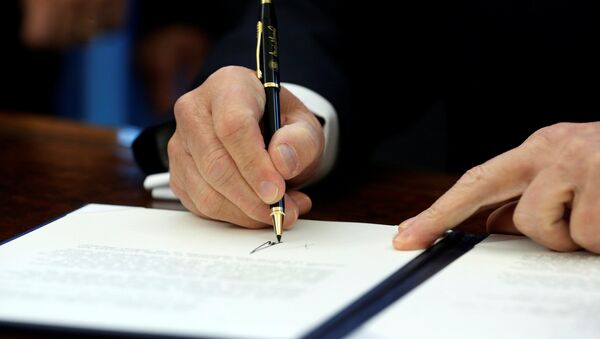 According to the AmCham's president and CEO, the latest anti-Russia sanctions will last for the next two or three US presidents' terms.

MOSCOW (Sputnik) — Latest US economic sanctions imposed on Russia in August are likely to persist for the next two or three US presidents' terms, President and CEO of American Chamber of Commerce in Russia (AmCham) Alexis Rodzianko said Friday.

"It is easy to vote against Russia in the United States. It is very hard to vote for Russia, even in the best of times. That law would be in the books for some time. Maybe quite likely pass the term of this president. I think the next 2-3 presidents will have to live with it," Rodzianko said at the 17th Annual Business & Investment Conference in Moscow.

The AmCham head also noted that the new sanctions targeted US President Donald Trump rather than Russia.

"On the Russian side, my advice is: do not take this so personally. It was not so personally against Russia, but [rather] against our sitting president [Trump]," Rodzianko explained.

Anti-Russian Sanctions Inefficient – Cyprus Foreign Ministry
Rodzianko added that the US business community in Russia had high hopes in the first half of this year regarding US-Russian bilateral relations until Trump fired former FBI director James Comey, who was responsible for the investigation into Russia's alleged interference in the US presidential election. The move was viewed as if Trump wanted to avoid investigation against himself and triggered anger in the US Congress.

In early August, the US president signed a draft law on new sanctions against Russia over its reported meddling in the US election in 2016. Apart from new restrictions against Russia's defense, intelligence, mining, shipping and railway industries, the legislation also limited Trump's powers to lift anti-Russian sanctions by requiring the Congressional approval to ease any restrictions.