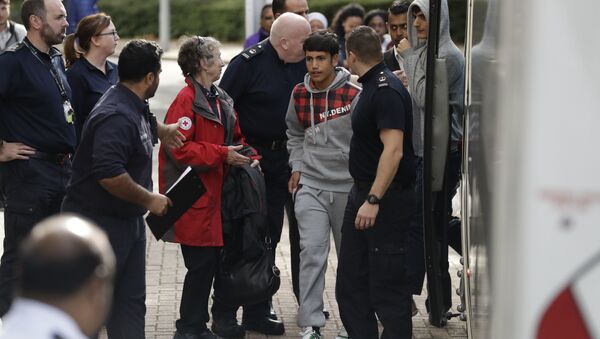 Banks and building societies across the UK are to carry out immigration checks on all current accounts in the UK from next year to identify any individuals residing in the UK illegally. An immigration expert has told Sputnik the "scary" policy will likely result in "pandemonium."

Banks and building societies across the UK are to carry out immigration checks on 70 million current accounts from January 2018 to identify visa overstayers, failed asylum seekers and foreign nationals facing deportation, in a major extension of then-Homes Secretary Theresa May's 2012 plans to create a "hostile environment" for illegal immigrants in Britain.

​"This is government intrusion into private affairs on a massive scale, and it's quite scary," a spokesperson for the Joint Council for the Welfare of Immigrants (JCWI) told Sputnik.

"The government are using a sledgehammer to crack a nut. They've got access to 70 million accounts to locate 6,000 people, who they should be able to find in any event," they added.

​Every quarter, banks must check the identity of their every current account holder against a Home Office-supplied database held by an anti-fraud organization, Cifas. It includes details of those whom the Home Office regard as liable for removal or deportation.

Banks hunting for illegal immigrants is a total waste of resources that should focus on the tax gap https://t.co/Tr5sGCsJ0T

Flagged accounts will be closed down or frozen to make it harder for holders to establish or maintain a settled life in the UK. It is hoped freezing accounts holding significant sums will serve as a "powerful incentive" for illegal immigrants to voluntarily agree to repatriation, with sums withheld until the individuals in question have left the country.

"This policy is fundamentally opposed to so-called British values of openness and community. All these attempts to make life in the UK inhospitable for 'illegal' migrants are going to achieve is the creation of a society that is suspicious and unpleasant for everyone — we predict there will be significant blowback for non-immigrant communities," JCWI spokesperson told Sputnik.

In particular, JCWI is concerned the policy will see a repeat of the "pandemonium" created by the government's "right to rent" policy, which requires landlords to check whether tenants have a right to be in the UK. The Home Office released "inaccurate data" to landlords, which saw many individuals who weren't staying in the UK illegally prevented from renting, and in some cases affected residents successfully sought compensation.

"Almost by definition, this will have a disproportionate impact on ethnic minority names — bank accounts held by legal UK residents with the same name as an illegal immigrant could be shut down. It's not clear how such problems will be resolved, and the Home Office's record suggests they are very likely to happen," the spokesperson continued.

Banks have been told to simply inform customers to take up the matter with the Home Office if a mistake is made, even if they provide a passport or biometric residence permit showing their presence in the UK is entirely lawful.

An official Home Office impact assessment notes there are safeguards to prevent the closure of a bank account which would leave the account holder without the means to live, but does not specify what these protections are.

Moreover, the assessment notes the measures could reduce the appetite of banks to offer accounts to legal migrants who do not have permanent leave to remain in the UK — and rather than encouraging illegal migrants to go home, it may simply drive them even further into the "hidden economy."

"This policy is not expected to exacerbate the situation but to contribute to the hostile environment, encouraging illegal immigrants to leave the UK on a voluntary basis," it says.

Other "hostile environment" provisions include checks on driving licences and tougher measures against illegal working.