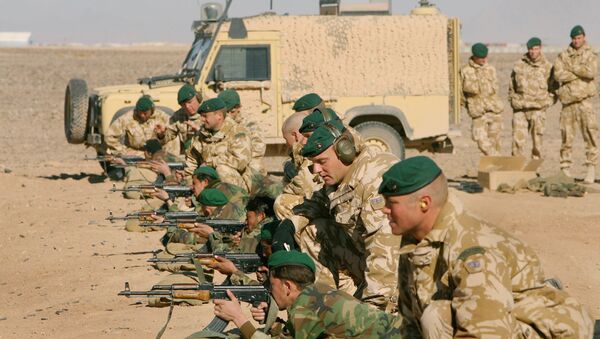 © AP Photo / Manish Swarup
Subscribe
With Brexit negotiations underway, and a "no deal scenario" emerging as a real possibility, UK businesses may find themselves unable to compete with their EU counterparts, due to high tariffs on imports into the union.

Britain's Tory-led government have repeatedly expressed the need to bolster trade ties with the US, Asia and Africa, to alleviate the economic fallout from an unfavorable EU exit deal.

The UK is the world's second largest exporter of armaments, with orders totaling £5.9 billion (US$8bn) in 2016 alone.

Manufacturers such as BAE Systems form the backbone of the UK's war and defense industry, exporting to dozens of countries, including regimes accused of war crimes and human rights violations. Military exports from the UK include attack helicopters, multirole fighter jets, and frigates.

Earlier in September, hundreds of British Kurds staged a protest in London, calling on the British government to end arms deals with Turkey. Kurds fear that military hardware supplied to Turkey will be used by President Erdogan against Kurdish-led forces in northern Syria, as well as PKK militants in Turkey. 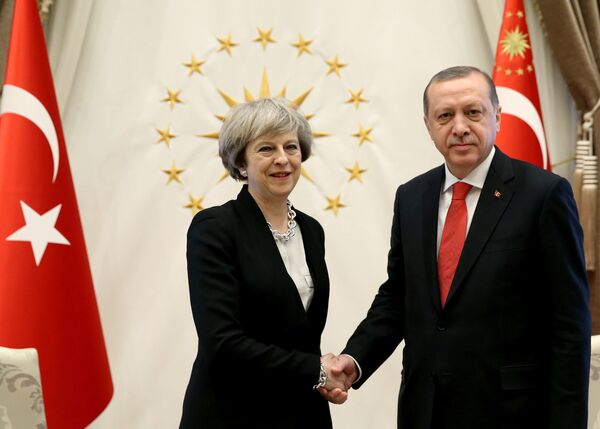 Turkey has already attacked Kurdish forces in Syria; in 2016, the Turkish military and allied militants launched an operation, Euphrates Shield, which aimed to prevent the Kurds from connecting their territory in northern Syria, forming what is effectively the southern region of the wider Kurdish state, known amongst Kurds as Rojava.

"One thing we need to get straight is that the weapons being sold here to Turkey are not going to be used against ISIS [Daesh]. They will be used to repress and attack the Kurds who live in that region and want to establish an autonomous state. Regardless of ISIS being defeated or not in the near future, Turkey has used and will continue to use these weapons against the Kurds both within its borders and in Syria," Ibrahim Avcil, a British Kurd from Turkey, told the Guardian.

The protest was strategically timed to run days before the London-hosted Defence and Security Equipment International (DSEI), dubbed "the world's biggest arms fair."

Models of Griffon, Jaguar and VBCI T40 on Nexter stand at #DSEI2017 pic.twitter.com/AY946Xv0mj

Rising tensions in the Middle East as a result of the Qatar-Gulf crisis, and the upcoming Kurdish independence referendum and associated territorial dispute in Iraq, are fuelling greater demand for UK-built military hardware in the region.

Global terrorism, hostile relations with Russia, and tensions with North Korea are also being attributed to skyrocketing demand for armaments.

Although sterling appreciated after Governor of the Bank of England (BoE) Mark Carney suggested that an interest rate hike was a possibility in the coming months, the currency has generally weakened from the uncertainty Brexit has brought about.

"There are robust safety measures to allow ethical defenses exports to flourish, protected by a licensing system to ensure exports are rational and lawful and which guarantees that we do not in the process violate international law, create tensions, promote terrorism or endanger global security. As the danger proliferates, defense's stock rises and the demand for the best kit goes through the roof. And today you'll find us making maximum use of our capability," Defense Secretary Michael Fallon said to delegates and attendees at his keynote speech at the DSEI earlier in September.

Brexit, Beyond the Seas: Where the UK Will Forge Its Post-European Future
Growing demand from the Middle East, coupled with a decline in UK-EU trade, makes it difficult for the UK to turn down defense contracts, even if they are subject to controversy.

Trade partners may also tie exports together, meaning that the purchase of one good may be contingent on the UK's willingness to supply another good — arms in this case.

This amplifies the potential economic and financial loss to the UK economy, potentially limiting the government's willingness and ability to restrict the sale of advanced weaponry (by not granting licenses) to controversial partners.

In any case, there has been no indication of plans by the British government to clamp down on such deals — on the contrary, they have defended them.

000000
Popular comments
The British and US local economies depend heavily on the kill and cause suffering industry. In the EU or out the UK is a loyal sycophant to the US Neoliberal Empire. It believes in and fully supports the Imperial policy of "Global full spectrum domination." It is deeply wedded to the empire and that will not change until the empire finally collapses from its own hubris. I mean just look at the Empire now, in its state of decay and fearful aggression - a bloated military it can afford less and less per day and the loss of economic, trade, development and any moral high ground only leaves that bloated military out there with decreasing money to pay for it and nothing to back it up that anyone wants.