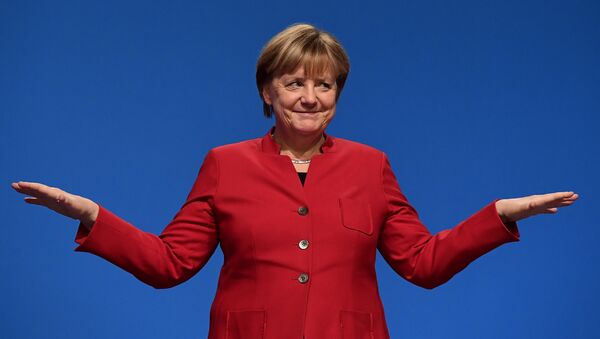 © AFP 2021 / TOBIAS SCHWARZ
Subscribe
Alternative for Germany party plans to launch an investigation into Merkel' decision to open borders in 2015.

MOSCOW (Sputnik) — German party Alternative for Germany (AfD) intends, once elected to the Bundestag, to launch a parliamentary commission to investigate decision of German Chancellor Angela Merkel to open borders in 2015, without seeking approval from the parliament, a party candidate to the Bundestag in the forthcoming election, Waldemar Birkle, confirmed to Sputnik on Friday.

"Merkel violated the law. This decision [on the opening of the borders] should have been taken by the Bundestag. And this did not happen," Birkle said.

Earlier in the day, German media reported that Bundestag experts had seen an unclear legal basis for the open-border policy launched by Merkel in 2015, as she bypassed the parliament in her decision.

Are There 'No Chances for a Real Fight?' Experts Scrutinize German Election
The AfD party, founded in 2013, has gained popularity since the outbreak of the migrant crisis in 2015. The party has focused on amendments to Germany's refugee policy in its election campaign.

According to a poll released by the GMS on Thursday, the AfD party may come in third in the election with 10 percent of the vote. Merkel’s conservative bloc comprising the Christian Democratic Union and Christian Social Union (CDU/CSU) is projected to come out on top with 37 percent of the vote, followed by the Social Democratic Party (SPD) with 22 percent.

Germany’s parliamentary elections are slated for this Sunday.