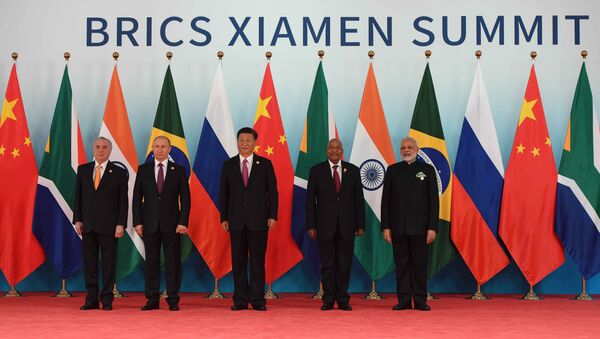 © Sputnik / Grigory Sysoyev/POOL
/
Go to the photo bank
Subscribe
African countries see the emergence of the BRICS as a symbol of hope for a better life. Despite all the problems faced by countries such as China, India and Brazil, these countries have been able to overcome their difficulties and create their own model of growth and progress.

This gives hope to the African continent that change and progress can occur in a timely manner if there is the will and good planning.

African countries also see the extent to which the US controls economic policies and the imposition of its interests, especially in the dominance of the dollar. This increases the importance of the BRICS. The strength of the BRICS bloc qualifies them to have a direct impact in the international arena. African countries believe that the BRICS can stop the depletion of Africa's wealth by developed countries and give them a real opportunity to participate in production and growth.

The emergence of the BRICS as major global players has raised hopes that a win-win partnership could foster the development of the continent. With the gradual demise of the "Global North," the BRICS bloc appears increasingly confident to challenge the market-led economic paradigm, and push forward forms of capitalism led by the state. By 2020 the BRICS will, combined, account for nearly half of global GDP growth. There is little doubt that they are well-placed to change the global, and local, dynamics of international development assistance.

China invited Egypt, Guinea, Tajikistan, Mexico and Thailand as guest countries at the Xiamen BRICS summit, albeit with the clarification that the invitation was not an attempt to expand the group under the "BRICS Plus" approach. China welcomes countries from all around the world that are interested in the BRICS mechanism, meeting the common aspirations of emerging markets and developing countries, although it is clear that the five countries may not always be invited to BRICS meetings in future.

The BRICS are attracted by the benefits of diversification in African economies as well as the possibility to enter into a large untapped market of 1 billion African consumers. Over the years, the BRICS countries have accumulated large amounts of reserves, which have been invested mainly in the developed world. The persistence of the global financial crisis, which has hit developed countries particularly hard, is motivating the BRICS to shift a portion of their investments toward emerging economies in order to maximize returns while reducing risks. Hence, Africa may offer the BRICS the opportunity to diversify toward new frontier markets. In recent years, sectors such as telecommunications, financial services and retail have recorded high rates of growth in most African countries due to high demand from Africa's growing middle class.

Egypt is a large and central country in the Middle East and Africa, giving it an advantageous geographical location, and Egypt also has huge human capacity. It is one of the largest markets in Africa with a population of 93 million. The economy is gradually improving, with annual rates of GDP growth reaching 4.3 percent in 2015/2016. The exchange rate has displayed some volatility, but has started to strengthen, notably with the strong foreign investor demand for local debt instruments.

Egypt has been working hard to create a good climate for investment. It has succeeded in developing important new policies through the issuance of the new investment law. The law granting operating licenses to factories, which allows for granting the license within seven days for non-hazardous activities, is a great qualitative leap.

Egypt has shown consistent financial stability and has a strong banking sector and developed infrastructure, as well as qualified labor at relatively low prices.

Egypt's volume of trade with the five-nation BRICS bloc was nearly $20 billion during 2016. Egypt recently signed a memo of understanding with China worth about $739 million for an electric railway line. The two countries have also signed an agreement for Egypt's second satellite — "EgyptSat-2" — with a Chinese grant of 300 million yuan ($45 million).

Egypt also has long-standing economic relations with India, and has various investments in the country. More than 50 Indian companies operate in Egypt in various areas including medicine, textiles, plastics and engineering. Indian investments are on track and serious negotiations are under way to increase them to $6 billion dollars. India also plans to operate an industrial zone in the Suez Canal axis for small and medium enterprises.

The BRICS bloc is well aware of the importance of Egypt and its potential. This is evident in the large number of invitations received by Egypt to attend the meetings of the BRICS as well as the intensity of meetings and the depth of relations between Egypt and all the countries of the BRICS.

We are hoping the BRICS will one day become the E-BRICS, where E stands for Egypt.

This article was written by He Wenping and Hisham Abu Bakr Metwally and published on The Global Times.

000000
Popular comments
BRICS just a tool for china to promote its one belt one road..otherwise there nothing in it.
K.T
22 September 2017, 07:21 GMT
000000
Newsfeed
0
New firstOld first
loader
LIVE
Заголовок открываемого материала
Access to the chat has been blocked for violating the rules . You will be able to participate again through:∞. If you do not agree with the blocking, please use the feedback form
The discussion is closed. You can participate in the discussion within 24 hours after the publication of the article.
To participate in the discussion
log in or register
loader
Chats
Заголовок открываемого материала
Worldwide
InternationalEnglishEnglishMundoEspañolSpanish
Europe
DeutschlandDeutschGermanFranceFrançaisFrenchΕλλάδαΕλληνικάGreekItaliaItalianoItalianČeská republikaČeštinaCzechPolskaPolskiPolishСрбиjаСрпскиSerbianLatvijaLatviešuLatvianLietuvaLietuviųLithuanianMoldovaMoldoveneascăMoldavianБеларусьБеларускiBelarusian
Transcaucasia
ԱրմենիաՀայերենArmenianАҧсныАҧсышәалаAbkhazХуссар ИрыстонИронауОssetianსაქართველოქართულიGeorgianAzərbaycanАzərbaycancaAzerbaijani
Middle East
Sputnik عربيArabicArabicTürkiyeTürkçeTurkishSputnik ایرانPersianPersianSputnik افغانستانDariDari
Central Asia
ҚазақстанҚазақ тіліKazakhКыргызстанКыргызчаKyrgyzOʻzbekistonЎзбекчаUzbekТоҷикистонТоҷикӣTajik
East & Southeast Asia
Việt NamTiếng ViệtVietnamese日本日本語Japanese中国中文Chinese
South America
BrasilPortuguêsPortuguese
NewsfeedBreaking
02:54 GMTDemocrat’s Anti-Trump Playbook Could Be a Losing Strategy for 2022 Midterm Elections
01:44 GMTBiden White House to Reportedly Announce Diplomatic Boycott of Beijing Olympics
01:07 GMTGambia’s Incumbent Leader Wins Presidential Election - IEC
00:31 GMTOmicron Mitigation: What Travelers to the US Need to Know Beginning Monday
YesterdayFauci Speechless After US Senator Asserts Epidemiologist 'Overhyped' COVID-19 Pandemic
YesterdayFrench Presidential Candidate Zemmour Attacked at Villepinte Rally - Reports
YesterdayTrump Slams Top US General Milley as 'F**king Idiot' Over Afghanistan Withdrawal
YesterdayWWII Veteran And Longtime US Senator Bob Dole Dies at 98
YesterdayIran Blames US Stubbornness on Sanctions for Breakdown of Vienna Nuke Talks
YesterdayZemmour Says He 'Would Like' to Withdraw France From NATO
YesterdayIsraeli Deputy Defence Minister Dodges Question About Tel Aviv's Complicity in Natanz Blast
YesterdayCorridors of POWDER: Brits React to News of Drug Sniffer Dogs in Parliament
YesterdayMercedes' Hamilton Takes Win in First Saudi Arabian GP After Chaotic Battle With Verstappen
YesterdayTucker Carlson Was Reportedly Friends With Hunter Biden, Intervened in Media Report on His Behalf
YesterdayPutin: People Vaccinated With Sputnik V Should Not Be Deprived of Right to Travel
YesterdayPolish Authorities Officially Confirm Detention of Russian Ship Ruslana
YesterdayBelgian Police Use Tear Gas After Clashes With COVID-19 Protesters Broke Out in Brussels - VIDEO
YesterdayTrump's Media Company Says Raised $1Bln From Investors
YesterdayOrigin of Water on Earth: Mystery Solved?
YesterdayIdentity of Baroness Mone's Accuser Reportedly Revealed as She Denies Racist Claims Against Her