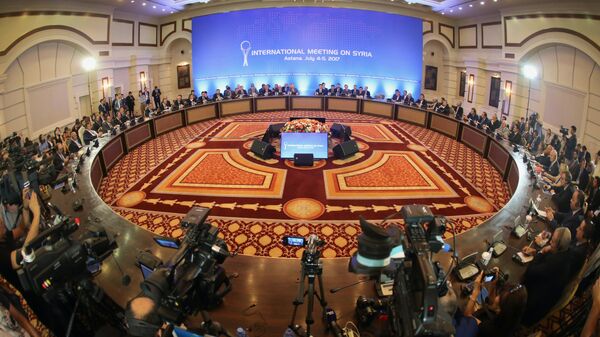 Russia has submitted a draft resolution in support of the Astana accords on Syria to the UN Security Council and is waiting for a response from them.

"We have distributed our draft resolution in support of the documents adopted in Astana. It is on the table of the Security Council members. We are waiting for a response from them," Russian Deputy Foreign Minister Gennady Gatilov said Thursday.

"We will," Jaafari said when asked if Iraq will join Astana peace talks as an observer.

"We are going to contribute to anything that would resolve the problem in Syria and would achieve stabilization in the region," he added.

Some 35 Armed Groups Side With Syrian Government Forces in Idlib - Russian MoD
Jaafari added that Bagdad seeks to be "timely present and effective."

Earlier this month, Alexander Lavrentyev, the head of the Russian delegation at the Astana talks on Syria, said that China, the United Arab Emirates, Iraq and Lebanon could obtain the observer status at the talks.

Last week, the three Syrian ceasefire guarantor states — Russia, Turkey and Iran — have made a breakthrough in reducing violence in Syria by reaching an agreement on all four de-escalation zones, including the one in the Idlib province. The sides also agreed that monitoring in the de-escalation zone in Idlib would be carried out by Iranian, Russian and Turkish forces, while the remaining zones would be maintained by Russian military police.

UN Special Envoy for Syria Staffan de Mistura said Friday he would consult Guterres and the UN Security Council in New York on the results of the sixth Astana talks on Syria before announcing the date of the next round of Geneva talks. De Mistura added that he would also hold a meeting with representatives of the countries, which were having an impact on the process of the Syrian settlement.