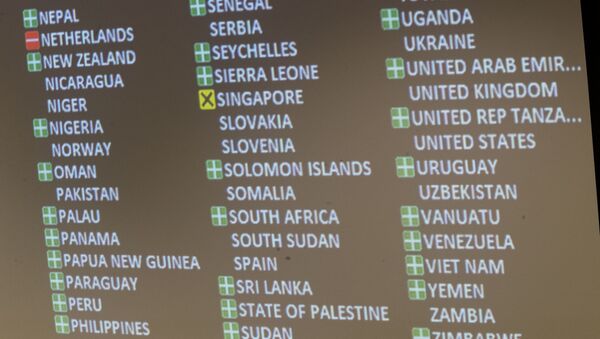 A number of signatories to the UN Treaty on the Prohibition of Nuclear Weapons have gathered in New York to discuss the progress of the agreement - although there's little to suggest their efforts will be successful.

A number of nations have signed the UN Treaty on the Prohibition of Nuclear Weapons, in search of a world liberated from "doomsday" weapons, as UN Secretary General Antonio Guterres once said. However, the world's nuclear powers — both official and unofficial — aren't quite as enthusiastic.

Here it is. The original copy of the UN Treaty on the Prohibition of Nuclear Weapons – now signed by 50 nations. #nuclearban #UNGA pic.twitter.com/Uy78Vk8R5k

This vast arsenal isn't evenly distributed across the nonet, with the US and Russia possessing around 93 percent of the total.

The US, UK, Russia, France and China are signatories of the 1968 Nuclear Non-Proliferation Treaty — the world's earliest nuclear disarmament initiative — while the remaining quartet are not (although North Korea was temporarily, withdrawing from it in 2003).

Oops! Israeli Defense Forces Accidentally Admit to Existence of Secret Airbase
Israel has never officially acknowledged its possession of nuclear capabilities, although it has been dubbed the "worst kept secret" in international politics.

The Nuclear Non-Proliferation Treaty obliged signatories to eventually rid themselves of such weapons, although it did little to stop the international spread of nuclear weapons — although, despite the number of nuclear weapon-equipped states rising since 1968, there are far fewer nuclear warheads in 2017 than during the Cold War.

The US and Russia, as a result  of a new Strategic Arms Reduction Treaty inked in 2010, are leading the push for arms reduction, depleting their warhead stockpiles and dismantling delivery systems.

However, with President Donald Trump's policy of increasing the US' defenses, the fate of START's future may now be uncertain. His administration has indicated the US may withdraw from the Intermediate-Range Nuclear Forces Treaty to aid upgrades and expansion of their stockpiles.

​Moreover, several nuclear powers have effectively offset reductive progress by developing or deploying new nuclear weapon delivery systems, or announcing their intention to do so.

Most notably, the US is expected to spend US$400 billion between 2017 and 2026 on maintaining and comprehensively updating its nuclear forces.

In a July report, SIPRI cited estimates Washington may spend up to US$1 trillion over the next 30 years on this modernization program.

The UK also backs implementation of the Trident nuclear system's successor, and France has signaled a desire to modernize its capabilities, including the creation of a next-generation ballistic missile submarine by 2035.

The Nuclear Hot Potato: To Keep, Scrap or Upgrade the Trident System?

China — Asia's biggest nuclear power — has embarked on a long-term modernization program focused on making qualitative improvements to its nuclear forces, rather than on significantly increasing their size.

While details are sketchy, there are suggestions Israel has developed a new intermediate-range ballistic missile, and there are unconfirmed reports Tel Aviv may be equipping its fleet of six German-built Dolphin class diesel-electric submarines with nuclear-armed SLCMs.

Nonetheless, Ukraine, Kazakhstan and Belarus represent an example of successful disarmament — the states all signed START I with the US, and lived up to their commitment to dismantle their nuclear stockpiles accumulated during their time as republics of the Soviet Union. In Ukraine's case, the arsenal was particularly vast — but now largely non-existent.

A number of countries have embarked on nuclear weapons programs, but have since renounced their aspirations. For instance, Iran rejected any military use of nuclear technology as part of an international agreement in 2015, supervised by the International Atomic Energy Agency.

South Africa Rebuffs US Attempts to Take Over its Nuclear Materials
Similarly, South Africa abandoned development of nuclear arms prior the end of apartheid, and Libya did likewise under Muammar Gaddafi.

There are strong suggestions some states, such as Saudi Arabia, wish to possess nuclear weapons, but conclusive evidence and/or proof of these ambitions remains elusive.

The Treaty on the Prohibition of Nuclear Weapons may well be doomed to fail — after all, the agreement is purely symbolic, and there is little non-nuclear states can do to compel nuclear-equipped countries to disarm — especially as every member of the permanent UN Security Council retains them.

NATO is not convinced about the initiative either, with a spokesperson saying it "clearly disregards" the realities of the international security environment.