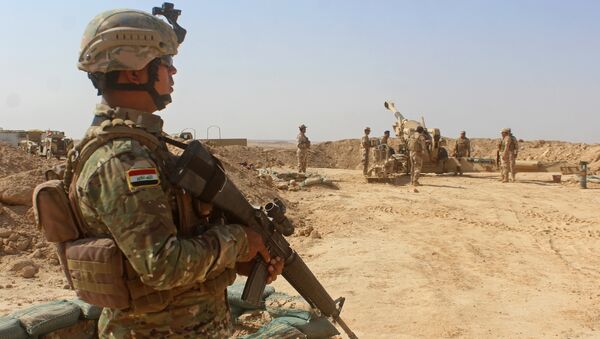 Iraqi security forces completely liberate the western city of Anah near the Syrian border and raise the Iraqi flag over its buildings.

BAGHDAD (Sputnik) — Iraqi security forces have liberated the western city of Anah near the Syrian border from the Daesh terror group (banned in numerous countries) militants, the commander of the operation Lt. Gen. Abdul-Amir Yarallah said in a statement.

"Divisions… and the militia have completely freed the town of Anah and raised the Iraqi flag over its buildings," the statement read.

On Tuesday, Iraqi Prime Minister Haider Abadi announced the start of the operation to clear the territories of western Anbar province and Anah city from the remaining Daesh terrorists.

Earlier in the day, Iraqi Security Forces started an offensive involving major combat operations in Hawijah in Kirkuk province in order to take back control of the city from the Daesh terrorist group and managed to liberate nine villages.

The terror group took control of Hawijah in 2014, but it became isolated during the battle for Mosul in July of 2016 when Iraqi troops took the city of Shirqat, the release added.